Lady Almina and the Real Downton Abbey by Fiona Carnarvon, the Countess of Carnarvon

First line: This is a book about an extraordinary woman called Almina Carnarvon, the family into which she married, the Castle that became her home, the people who worked there, and the transformation of the Castle when it became a hospital for wounded soldiers during the First World War.

Summary: Written by the current Countess of Carnarvon we are taken into the past to meet the woman that helped inspired the hit television series Downton Abbey. Almina was the daughter of Alfred de Rothschild. Her dowry was used to help support the struggling estate. Almina opened the house to be used as a hospital during World War I and her husband was part of the team who discovered the tomb of King Tut. Using information from letters and diaries of the occupants of Highclere Castle, we get the true story of this great house.

My Thoughts: I have been a fan of the series Downton Abbey from the start. I watched each season religiously. I even got my mother hooked on it. I knew that much of the inspiration for the story was drawn from real life events. I have been meaning to pick up this book for years and with the upcoming movie I figured it was the right time.

It is easy to see that author had access to many primary sources and a wealth of information. She fleshes out the woman who saved the family from ruin and brought them into the 20th century. I loved hearing about her life before and after her marriage. She did so much for the house but my favorite part by far was the discovery of King Tut’s tomb. From a hobby in the desert and a final chance to find something worth the money they find one of the greatest discoveries of all time.

There is a follow up book called Lady Catherine, the Earl, and the Real Downton Abbey. It is next on my list.

FYI: The Downton Abbey movie is released in theaters on September 20, 2019. (Several of our staff plan to see it this weekend. Hope to see some of you there too!) 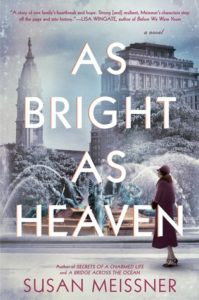 As Bright As Heaven by Susan Meissner

First line: Morning light shimmers on the apricot horizon as I stand at the place where my baby boy rests.

Summary: When the Bright family, Thomas, Pauline and their three daughters, decide that they are going to move to Philadelphia they believe that it will be a new start away from the sorrow of the last few months. Thomas is apprenticing his uncle’s mortuary business. This seems a strange place to bring a family after the loss of their infant son and brother but for Pauline it helps her heal and understand death better. But suddenly the war and the Spanish Flu descend on the family. They have to deal with more than they ever expected.

Highlights: Susan Meissner can write beautiful stories rich with historical detail and human emotion. Her characters are always amazing and deep. It was a very fitting time to read about the flu after the strong strain that hit the U.S. this year. It is also the 100th anniversary of the epidemic. I liked the love stories and the history.

“She says the flu wanted to make barbarians of us, to have us think life is not precious and the dead are not worthy of our kindest care. Our humanity is what made what happened to us so terrible. Without it, nothing matters.”

Of course I had to search Newspapers.com (using the link on our library website) to see how Wichita reported the events of the time.  It seemed that the who country shut down to help protect civilians from the dreaded flu that was wiping out millions of people. 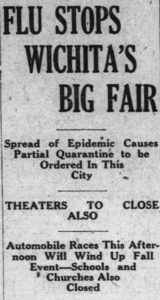 Lowlights: I felt like the narratives of Pauline and Willa were not completely necessary. They did not provide too much to the story. The story could have been shortened by 50 pages or so. I ended up skimming the last 40 pages to see how the characters and story wrapped up.

FYI: I loved her book, The Secrets of a Charmed Life, which is set during the Blitz in London during World War II. 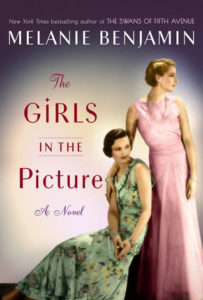 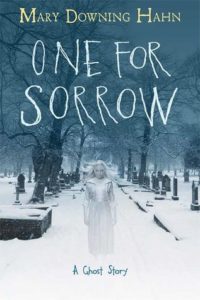 One for Sorrow by Mary Downing Hahn

First Line: Although I didn’t realize it, my troubles began when we moved to Portman Street, and I became a student in the Pearce Academy for Girls, the finest school in the town of Mount Pleasant, according to Father.

Summary: Annie is a young girl in 1918.  World War I is still raging in Europe and the Spanish flu is spreading across the United States.  When Annie starts at a new school she meets a strange girl, Elsie, who instantly claims her as her friend.  Annie discovers that Elsie is not liked by the other girls in the class.  She is picked on and teased by others, which make Annie a target now too.  But when Annie befriends the other girls in the school and drops Elsie things get worse.  The flu finally hits Mount Pleasant. Annie’s new friends decide to pretend to be mourners and attend funerals in order to receive free treats.  When they attend one funeral they are shocked to see that it is Elsie’s.  She had succumbed to the flu after the girls had teased her and taken away her flu mask.  All the girls feel terrible about what happened but when Annie receives a concussion from a sled ride she starts to see Elsie’s ghost.  And she is not happy.

Highlights: This is spooky.  I read Mary Downing Hahn’s books when I was younger and remember them being scary.  Even now as an adult I was a little creeped out by the character of Elsie.  It was also a history lesson.  I have read and seen many shows that depict the time of Spanish flu but this makes it more real and scary too.  To think how many people died and how quickly it happened can be a little terrifying.

Lowlights: I got really annoyed with Elsie.  The repetition of her obsession with Annie kept dragging on.  This I am sure is what the author intended since she is the villain of the story.

FYI: May be too scary for younger readers.