The Gilded Ones by Namina Forna

First line: Today is the Ritual of Purity.

Summary: The Ritual of Purity is the day that young girls enter womanhood. Deka has always been different from the others in her tribe but she hopes that the ritual will redeem her in their eyes. But on the day, her blood runs gold rather than red, marking her as impure. She is imprisoned by the village elders.

After weeks of torture, a strange woman arrives and takes her to join a group of girls just like Deka. She learns that she is alaki, near immortal with special gifts. The girls are trained to fight and kill Deathshrieks, a creature that attacks and kills the people of Otera. As she trains she finds friendships but also starts to question everything that she grew up learning.

My Thoughts: The cover immediately caught my attention. It is stunning. Gorgeous colors that bring to life the West African feel of the story. The magic system, the different characters and the creatures were all wonderfully done. Even though many of the themes were typical of the young adult fantasy novel the details made it different. I was intrigued by the way Deka could heal, her powers and her backstory (once we learn more about it at the end).

I did find that parts seemed rushed. Especially the training at the beginning and the battle at the end. Everything happened so fast with very little build up. Part of me liked not having it drawn out but also it seemed to suddenly be over too. I had to sit and think about the big reveals at the end because there was a lot of information dumped in but once I figured out everything it was a great twist. Even though the book seemed to end without a cliffhanger there are at least 2 more books planned.

FYI: A new young adult book with a strong female lead and feminist ideas. Perfect for fans of The Children of Blood and Bone. 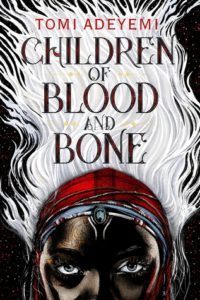 Children of Blood and Bone by Tomi Adeyemi

First line: I try not to think of her.

Summary: Magic once flowed through the land of Orisha. Maji’s controlled the magic. However, the king led a raid on the Maji of the land, killing them all. Zelie had to watch her mother die because of her magic and she has never forgotten. When Zelie stumbles upon the escaping Princess Amari she starts a quest to bring back magic to the land and revive the Maji. On their tail is Amari’s brother, the prince of Orisha, Inan who is determined to stop the return of magic but he is also hiding a dark secret.

Highlights: That cover! Skies! It is amazing. The author, Tomi Adeyemi, is a born storyteller. In her debut novel, she develops a fantasy world with great cast of characters and rich history. Tomi builds a world that resembles West Africa. The beasts and landscape are easily comparable but also very different. She weaves magic and heart into the whole story. While I was reading, I could easily picture it all happening right before my eyes. I loved all the action sequences. Zelie is badass! She has to hide her skills but she can whoop anyone. Also secretly, Amari is skilled as well. I love seeing amazing female characters that can kick butt and do!
The story is told from three different perspectives. Zelie, Amari and Inan each play an important part in the narrative. Zelie, a Diviner, is the child who had everything taken away from her when the Raid killed her mother. Amari is the princess who grew up sheltered but sees her friend, a Diviner like Zelie, killed by her father. And Inan, the crown prince, who has been taught to fear magic and fight to eradicate it. From each character, we get a look into the prejudices and history of Orisha and its people. All three have to learn from the events of the story and overcome their challenges in order to find peace and equality.

“You crushed us to build you monarchy on the backs of our blood and bone. Your mistake wasn’t keeping us alive. It was thinking we’d never fight back!”

This book is a powerful story that was written in a time of unrest. In the author’s note, she describes turning on the TV and feeling afraid. It is important that we have more books that show that just because we look different we are really all the same no matter what.

Lowlights: The only fault I found was the quick progression of the love story. At least to the reader very little time had passed and they were already talking love. This is one of the biggest troubles with YA fiction but it can easily be overlooked when there is a great story line like this.

FYI: Perfect for fans of Red Queen by Victoria Aveyard and the movie, Black Panther!