Some of the classics are hard to read.  Either we do not understand the language or the story is not as fast paced as the latest thriller.  However, there are so many great things about them.  They have survived the times.  The stories still speak to readers today.  One of greatest is the bard, William Shakespeare.  I read several plays during high school English, my favorite being Hamlet.  Do you have trouble with Shakespeare?  Trust me sometimes I do too.  Check out Alyssa’s blog post about her recent interest in the works of Shakespeare.

An Assassin’s Guide to Love and Treason by Virginia Boecker 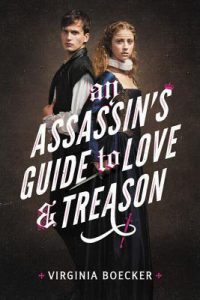 First line: It is not the usual interrogation.

Summary: When Katherine’s father is killed in front of her she vows that she is going to take revenge on the person responsible, Queen Elizabeth I. She travels to London dressed as a boy to meet with fellow Catholic conspirators to hatch a plan to kill the Protestant queen. Toby, an agent of the queen, is on the lookout for any assassination plots. When he teams up with William Shakespeare and his company of players, he sets a trap for the would-be assassins. However, Katherine and Toby are drawn to each other complicating both of their missions.

Highlights: Assassination plots and William Shakespeare?! Yes please! I found the story to be lots of fun from the very beginning. I enjoyed both of the main characters. Katherine is a strong willed young girl who is determined to avenge her father. Toby is a heartbroken playwright working as a spy for the queen. I loved watching Katherine throwing off her inhibitions as she took on the role of a man. She gets to see things that women would not be privy to normally. As their relationship progresses I got more and more nervous about how the story would end. This story was fit for Shakespeare with the mistaken identities, daring murder attempts and tragic love.

Lowlights: I would have loved more Shakespeare. Any time he entered the story it became even better! His patron even mentioned how he liked to make up words, which he does throughout the story. Such a nice little historical tidbit to add into the dialog.

FYI: Perfect for fans of A Lady’s Guide to Petticoats and Piracy by Mackenzi Lee.