On my most recent trip to Germany I had the privilege to visit Dusseldorf and Schloss Burg, the home of Anna of Kleve. Before I visited my brother in law told me about this castle. I knew I had to see it for myself. It was a long hike through the woods and up the hill to this fortress but it was worth every step. It overlooks the town of Solingen, a picturesque town in Western Germany. Even though very little is mentioned about Anna at the castle it is where she spent much of her childhood leading up to her marriage to King Henry VIII.

Anna of Kleve: The Princess in the Portrait by Alison Weir

First line: Anna peered through the window of the gatehouse, watching the chariot trundling through below, enjoying the rich sensuousness of the new silk gown she was wearing, and conscious of her parents’ expectations of her.

Summary: Anna of Kleve is the daughter of a German duke. She is raised to be the wife of a powerful man. When Henry VIII is unexpectedly widowed, he is in search of a fourth wife. His ministers look to Anna for this honor. As Anna embarks on the journey to England she worries about what her life will be like as the Queen of England. After her initial encounter with her future husband her worries mount. Does he like her? He does not appear to. However, as the first months of her marriage progress her worries begin to vanish. Then she receives news that the king has grave doubts about their union. What does this mean for Anna? Will he send her to her death like one of her predecessors?

My Thoughts: Anna is probably one of the least talked about of Henry’s wives. I have read numerous books about the other five but she seems to be largely forgotten. This is rather sad because she was probably the luckiest of the six wives.

I really enjoyed learning more about her life before, during and after her marriage. She led such a sheltered life before coming to England. I cannot imagine the shock of life in Henry’s court compared to Kleve. And the fact that her husband is an obese man who had killed a previous wife. How terrifying! Her reign as queen was a very short lived one. However, she seemed to have made quite an impression on the people of England. I was very frustrated reading about the struggles she had to deal with after the death of the king. She was an important lady and was treated very badly by the men who ran the government of the new king, Edward VI.

Weir took a lot of liberties with the history by adding in a romance that has no basis in fact. Even though it deviates from the record it was fun to read and imagine that Anna had some love in her life.

This is not a book that can be read quickly. There is tons of information, characters and time to cover. I spent several weeks slowly working my way through the narrative but I found it fascinating. Weir does a great job bringing life to the wives. I am highly anticipating her books on Katheryn Howard and Katherine Parr.

FYI: This is book four in the Six Tudor Queens series by Alison Weir. 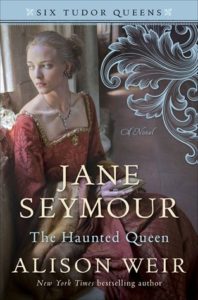