Every Vow You Break by Peter Swanson

First line: She first spotted him at Bobbie’s Coffee Shop on Twenty-Second Street.

Summary: Just days before her wedding to millionaire, Bruce Lamb, the one night stand from her bachelorette weekend shows up trying to convince her to not go through with the wedding. She tries to ignore his attempts but then he appears at her wedding too. But she thinks that his stalking is over until he appears at the secluded island on her honeymoon. Does she tell Bruce or try to solve the situation on her own?

My Thoughts: When I looked at the rating for this book I was kind of surprised that it was so low. I found the book to be rather enjoyable with lots of dark and twisted moments. I found it to be more like an eighties horror movie than psychological thriller. And part of that can be found that several reveals were rather predictable. But I had a lot of fun reading it nonetheless.

Even though the island is supposed to be secluded and good for getting away from technology it also seems rather scary. You are secluded. On an island. With little communication. What if something bad happens? Well this book answers that question. And it was thrilling and scary. 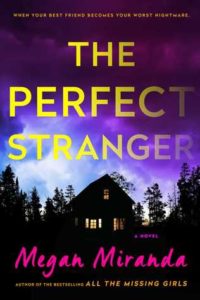 The Perfect Stranger by Megan Miranda

First line: The cat under the front porch was at it again.

Summary: Leah Stevens was once a reporter in Boston but when a story she wrote ruined her reputation she decided to pack up and move to a small town in the middle of the Pennsylvania wilderness with an old roommate.  However, the sleepy town is anything but.  First, a woman, who looks strikingly like Leah, is attacked and then her roommate, Emmy, disappears.  Very little is known about either woman.  Leah uses her skills as a journalist to help her find her friend and get the answers to who attacked the woman in the woods.

Highlights: Creepy.  Stalkers and mysterious voices on the phone.  Roommates with secrets.  A lookalike attacked nearby.  I was filled with many theories but each seemed to fall through as each new detail was revealed.  Megan Miranda has once again delivered a great psychological thriller that is hard to put down.

Lowlights (or what could have been better): The last chapter was a little anti-climactic.  It wrapped everything up which was good but at the same time disappointing.  I wanted to be left with a “didn’t see that coming” feeling.

FYI: It is number two in the All the Missing Girls series but it does not have to be read in any order.  The stories are completely unconnected. 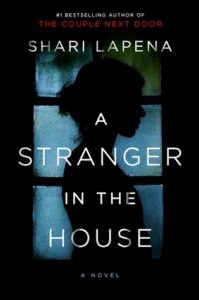 A Stranger in the House by Shari Lapena

Summary: When Tom comes home late from work he finds the house empty.  His wife, Karen, is missing but her phone and purse are still there.  Where did she go?  Shortly after he receives a visit from a police officer telling him that Karen has been in a car accident in a rough neighborhood.  What was she doing there?  When he visits her at the hospital, she cannot remember what happened in the previous hours.  However, when a body is found murdered near the area of the car accident Karen becomes a suspect in the investigation.

Highlights: Lapena’s second novel is gripping and a fast read.  I liked the ways that little facts and tidbits are revealed slowly throughout the story line.  The end was not what I was expecting.  I should have known to expect a surprise after the author’s previous book.

Lowlights: Several of the details and twists were easily predictable but it was still enjoyable to read and know that I was correct.

FYI: Perfect for fans of Girl on the Train and All the Missing Girls.