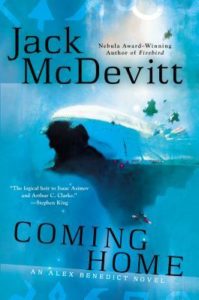 First line: When Alex Benedict graduated high school, his uncle Gabe, the only parent he’d ever known, provided the ultimate gift: a flight to Earth, the home world, the place where everything had started.

Summary: The year is 11,256 C.E. Earth is no longer the only inhabited planet in our galaxy. Thousands of years have passed and new worlds have been discovered but the artifacts from the Golden Age (early space travel) are rare and valuable. Many items have been destroyed or lost as Earth has dealt with flooding and other disasters. When an artifact is brought to Alex and his assistant, Chase, they begin to search how the item was just discovered and where it may have come from.
At the same time, a ship has been missing for 11 years. The passengers are believed to be dead. However, when the ship appears it is only available for a few short hours. For the passengers aboard they believe it has only been 3 days. How are all the people off the ship in such a short time?

Highlights: A very imaginative science fiction novel with a very intriguing plot. This was recommended to me and I was immediately interested. The idea of space travel and that items from our lives are considered ancient artifacts is fascinating. The science is not overwhelming which is perfect for me who has very little scientific knowledge. I liked the mysteries intertwining. I kept trying to think what I would do in the situation if I were stuck on a ship not realizing that 11 years had passed by in the blink of an eye. What would I be willing to do to get back to my family who have moved on? Highly enjoyable novel.

Lowlights: The book is part of the Alex Benedict series but he was in the story very little. It mainly followed the assistant, Chase. We never found out too much about him but those details may have been included in other books in the series.

FYI: Part of a series but can be read as a standalone. It has references to other books in the series but not enough to hinder the reading of this one.