Not a Happy Family by Shari Lapena

First line: There are many expensive houses here in Brecken Hill, an enclave on the edge of Aylesford, in the Hudson Valley.

Summary: In the rich neighborhood of Brecken Hill live the Mercer’s. They have lived here for years where they raised their family, grown a business and been the envy of all. But one Easter weekend after a family dinner the Mercer parents are found brutally murdered in their home. It appears to be a robbery but with all the secrets in the Mercer family the police are sure that one of the adult children has something to do with it. As they dig deeper they find that there are more secrets than anyone originally thought.

My Thoughts: This was a solid book. Lots of suspense. Red herrings around every corner. Lots of backstabbing, threats and secrets. I finished it in just a few days. It kept me interested throughout but I feel like it has been done before like so many thrillers lately. All the characters were awful people. Not one was likeable. There were some loose ends that I felt were not dealt with and characters that seemed a little nonessential. But did I have fun reading it? Yes. Will I recommend it? Yes. It was fun for a quick summer read. 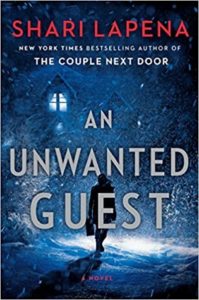 An Unwanted Guest by Shari Lapena

First line: The road curves and twists unexpectedly as it leads higher and deeper into the Catskill Mountains, as if the farther you get from civilization, the more uncertain the path.

Summary: For the guests of Mitchell’s Inn in the Catskill Mountains it looks like a beautiful winter weekend. However, when a body of one of the guests is found at the bottom of the stairs on the first morning things become less idyllic. Add to that a power outage from an ice storm and the guests begin to fear for their safety since there appears to be a murderer staying at the hotel.

Highlights: I recently read And Then There Were None by Agatha Christie. As I started reading An Unwanted Guest I was comparing the two novels. A remote location, a group of strangers, no way to leave and murder! How can you not go wrong with a combination like this? I found the story fun and engaging. Each character was interesting and had little secrets of their own. The idea of being stuck in a hotel with strangers and no electricity while a murderer is on the loose is a bit terrifying. I wish I could have read this during the winter wrapped in a blanket. I liked the atmosphere and suspense. This was a quick read and lots of fun.

Lowlights: I was a little shocked by the ending. However, I thought that when the killer was revealing everything it was a little rushed and quickly thrown together. It did not seem like it was planned out or given too much thought.

FYI: Read the author’s other two books, The Couple Next Door and A Stranger in the House.