The Borgia Confessions by Alyssa Palombo

First line: The day I learned of my father’s plans for me, I was but nine years old.

Summary: In the summer of 1492 in Rome Cesare Borgia sees his father rise to the become the newest pope. Cesare has been forced to follow his father into the church but he knows that he is destined for something more. He has a strong military mind and passion to rule. However, his father is blinded by his ambitions to consider what Cesare wants.

Maddalena Moretti has come from the country to work in the Vatican. As a servant she sees into the world of powerful men who rule Europe. When she catches the eye of the handsome cardinal, Cesare Borgia, their lives become entwined as Rome and the rest of Italy fight the changes that are coming for them all.

My Thoughts: I love Alyssa Palombo. She is such a talented writer. She brings her stories to life and makes the characters believable. Even though many of the characters in this story are not likeable she does a fantastic job of getting the reader to at least understand them. I have been fascinated by the Borgia’s since picking up The Borgia Bride by Jeanne Kalogridis. I was very excited when I saw that Alyssa Palombo’s newest book would be centered on this notorious family.

I love the intrigue and drama of the Borgia family. They were people who schemed for everything they got but were at the center of religious power in Europe. I am very familiar with their story so there was not much that surprised me in the narrative but I loved the naughty bits which were more prominent in this novel compared to her other ones. I liked seeing the world from the eyes of a servant. At the end the author discussed how she wanted to look at the events from someone of power and someone without power. I agree it makes it much more interesting to see both sides.

FYI: Perfect for fans of Philippa Gregory and Alison Weir.

The Haunting of Maddy Clare by Simone St. James

First line: The day I met Mr. Gellis, I had been walking in the rain.

Summary: Sarah Piper is a poor young woman working for a temp agency in London when an unusual job becomes available. She is hired on as an assistant for a ghost hunter. Alistair Gellis, a WWI veteran and ghost enthusiast, is determined to prove the existence of ghosts. He wants Sarah’s help with the ghost of Maddy Clare. Maddy was a servant for the Clare family until she took her own life in their barn. Now her spirit is wreaking havoc on the occupants. With the help of Matthew Ryder, a former soldier and friend of Alistair’s they search for a way to help Maddy move on and solve the mystery behind her destructive behavior.

My Thoughts: Absolutely chilling! Simone St. James is by far one of the best writers, in my opinion, of the Gothic ghost story. She can weave the historical fiction, romance and spookiness together seamlessly. I have been meaning to read this for some time now. It took me just a few days to read because it was that good!

I loved the mystery behind Maddy. No one knew who she was or where she came from. She had no memory and rarely spoke. Then one day she hangs herself in the barn of her employer. That’s when the trouble really begins. Maddy’s vengeful spirit is set to attack any man who sets foot on the Clare property. What happened in her past? Sarah’s first interactions with Maddy were a little terrifying. It literally gets your blood pumping as you read it. When you pick this up be prepared to finish it. Maybe even the same day. Just saying.

FYI: If you like this then try Wendy Webb and Amanda Stevens. 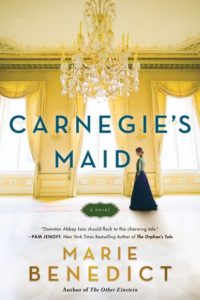