The Turn of the Key by Ruth Ware

Summary: Rowan Caine stumbles upon an advertisement for what appears to be the perfect nanny job. It is for a family with four children, in a big house in Scotland, and a yearly salary of fifty five thousand pounds. When Rowan arrives for her interview she is blown away and a little intimidated by the house. It is a smart house. Everything is connected to apps that can be managed from a cell phone.

After her initial interview she is offered the job which seems like a dream come true. However, she does not realize that appearances can be deceiving. On her very first day she is left alone with the three younger children while the parents are at a weeklong conference. The adjustment for the girls is not going as smoothly as she had hoped but she is trying her best to befriend them.

When strange happenings start to disturb her nights she begins look into the history of the house and what could be causing these strange noises in the attic. With each new night she gets less and less sleep as the mysterious sounds gradually increase. Will she be able to make it through her first week or will she leave in the middle of the night like the other nannies before her?

My Thoughts: I really enjoyed Ruth Ware’s previous novel, The Death of Mrs. Westaway, but I think this one blew it out of the water. I seriously considered giving this 5 stars because it was very hard to put down. There was the perfect mixture of spookiness and suspense.

I love how the house appears to be a big old Victorian but inside it is very modern. I love the idea of a smart house but at the same time it is also a little scary. I completely understand Rowan’s unease with the cameras and app enabled features. And the fact that this house is basically out in the middle of nowhere. Anyone could easily be spooked by any sounds in the night.

I enjoyed the way that the novel was laid out. It is done in a series of entries in a letter from Rowan to a solicitor while she is in prison for the death of a child. She eludes to what happens but we do not get the full details until the end.

This is full of twists and turns. When you think you have had the big reveal another one appears. I loved every minute of reading this. I would highly recommend this to anyone who is looking for something that they cannot put down. Trust me. I had to force myself to sleep instead of reading one more chapter.

FYI: Warning: a child does die in the book.

The Book Jumper by Mechthild Glaser 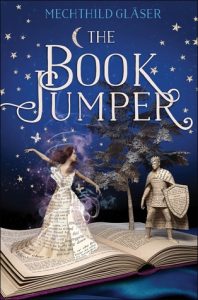 Summary: Amy and her mother, Alexis, decide to make a trip to Scotland to their family estate on an island called Stormsay.  When they arrive at the ancestral home and she finally meets her mother’s family she learns a secret that will take her love of reading to a whole new level.  The two families that live on the island are able to jump into books and interact with the characters and story. Their mission in life is to protect the stories and keep them running smoothly.  On her first day of lessons as a book jumper she enters the world of The Jungle Book but as the days pass things in the literary world start falling apart. It appears that someone is stealing ideas from stories!

Highlights: Once again the cover caught my attention. But the idea that someone could jump into a story and live along with the characters is a dream come true.  What story would I jump into?  The possibilities are endless. The little twists were fun and kept you wondering.  The other stories were chosen well with a variety of different themes.

Lowlights: Spoilers. Several of the books that are mentioned I have not read but the plot gives away the endings to many of them.  It made sense for the story and it isn’t a major problem but it was a little frustrating.

FYI: This story was originally published in German.