The Guilt Trip by Sandie Jones

First line: The policeman, with the slicked-back hair, stands at the bottom of my hospital bed, staring at me intently.

Summary: Rachel and Jack, along with their best friends, Paige and Noah, have traveled to Portugal for a wedding. Jack’s brother is marrying the young, beautiful and impulsive, Ali. Even before the trip starts secrets start to reveal themselves about who Ali really is. Jack says he had a coworker tell him about an affair he had with Ali. And as the trip progresses Rachel begins to believe that this is a cover story for an affair between Jack and Ali. As more clues come to light, Rachel is convinced that her marriage is not what she thought it was. Does she ruin the weekend and tell the secret or does she wait until it is too late?

My Thoughts: I was unbelievably disappointed in this story. It was like a high school drama. So many worries about someone kissing someone else, insinuations, flirting, innuendos and lots of drama! Rachel was worried just because she felt insecure. Then her friend continued to feed into the insecurity. It was a lot of hearsay and bad timing. I was just so done with it about half way through but I kept going hoping that it would redeem itself or bring it to a satisfying conclusion but it was a silly ending. Not Sandie’s best book.

FYI: Skip this one unless you love relationship drama.

The Half Sister by Sandie Jones

First line: Kate sees the familiar nameplate on Dr. Williams’ office door and feels a knot in her stomach.

Summary: Kate and Lauren are sisters who recently lost their dad but each of them has a different idea of who the man actually was. Kate idolized him. Lauren’s relationship was more distant. Then one night at a family dinner a woman shows up who claims to be their father’s daughter. Everyone is shocked by the revelation but none more than Kate. She is determined to prove that Jess is a liar. Lauren is more accepting of her which leads to even more discord in the family. As Kate looks deeper into Jess’s story she finds that not everything is as simple as Jess claims.

My Thoughts: This book kept me reading! I kept telling myself just one more chapter. One more chapter. I loved the different viewpoints. I liked that each woman was completely different from each other. It made the story more interesting because of the conflict. Little clues and hints appeared throughout. Some were red herrings. Others were not. I flew through this book with my heart pounding waiting for the ending.

I do have to say though that some of the stuff seemed a little farfetched. There were some overreactions and wild theories from the characters. I rolled my eyes a few times because it got a little dramatic but it did not stop me from reading it. I was pleased with the ending. I would highly recommend this for fans of thrillers and fast paced novels.

FYI: Great for fans of Ruth Ware and Shari Lapena.

The First Mistake by Sandie Jones

First line: “Sophia, let’s go,” I call out from the hall.

Summary: Alice’s life is beginning to come back to normal. She has remarried after the death of her first husband. She has two beautiful daughters and a successful business. But when her husband, Nathan begins acting strangely she turns to her best friend, Beth. As they talk about the situation Alice begins to wonder who she can trust anymore.

My Thoughts: This by no means is anything groundbreaking or new to the genre but it was a lot of fun to read. It went by very fast and kept me interested the whole way. I liked how it was divided into sections for each of the women. We got a look into each of their lives and pasts which helps build up to the conclusion. I had so many theories flying through my head as I read. Each became more twisted with each passing page.

I would highly recommend this to anyone who likes a fun thriller. It is a perfect summer read!

FYI: Sandie Jones’ first book, The Other Woman, is fantastic as well!

There are so many good book clubs out there!  We have 3 here at the library.  Joyful Page Turners, our longest running book club.  Bemused Bibliophiles, our hot and popular book club.  And last but not least, Hauntingly Good Reads, our paranormal book club. I love to see how each club is expanding, adding new members and picks a wide variety of books.

It is great that we have options but sometimes it is not always easy to make it to a meeting.  Or you are an introvert who likes to read but not talk.  I have found several online book clubs that I like to follow.  I read the book and can chat on websites like Goodreads.com about my thoughts without leaving home.  The most recent one I have checked out is Reese Witherspoon’s Hello Sunshine book club.  Her book for November is The Other Woman by Sandie Jones. 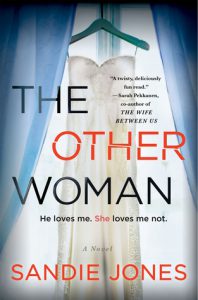 The Other Woman by Sandie Jones

First line: She looks beautiful in her wedding dress.

Summary: Emily thinks she has found the perfect man in Adam. He is handsome and smart. However, she has a rival. His mother, Pammie, is determined to keep Emily and Adam apart. Will Emily be able survive a mother’s love?

Highlights: Debut author, Sandie Jones, brings us a psychological thriller with the mother-in-law from hell! Emily meets the man of her dreams and everything seems perfect until she meets his mother. I immediately hated Pammie. She was terrible to Emily in every interaction. She was so smooth about everything. However, the closeness of Adam and Pammie seemed almost too close. I started to doubt my theories after each interaction. I was a little surprised by the ending. It was one of the options I had considered but it was still shocking to read it.

Lowlights: I kept getting mad at Emily too. Is he really worth all this mental torture from his mother? She keeps sticking around and taking it. Why? I did like it when she tried to stand up for herself rather than just letting it go.

FYI: Did you like this?  Try Behind Closed Doors by B. A. Paris for something similar!