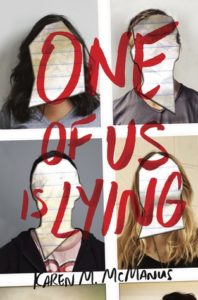 One of Us Is Lying by Karen M. McManus

Summary: Five students are in detention. All were put there because they were caught with a phone on them in class. However, when one of the students, Simon, dies during detention the others are all suspects. Simon is the school gossip. He posts all the rumors and secrets of his classmates on the internet making him one of the most hated kids in the school. Each of the “Bayview Four” know that they were being framed but by who?

Highlights: This has been compared to The Breakfast Club meets Pretty Little Liars and I think that is spot on. I love both and together they are great. I really enjoyed this debut novel. The mystery is good with little twists. The characters are great representations of teens and the problems that they deal with. Problems with family, friends, relationships, sports, and school. There was the jock, the brain, the popular girl and the burn out. It was a fun fast-paced novel. I will definitely keep a look out for the author’s next book.

Lowlights: Nearing the end I started to guess at the conclusion. It felt like all the likely scenarios were too easy so the better option was the not so obvious one.

FYI: Great for younger readers who want a good thriller.