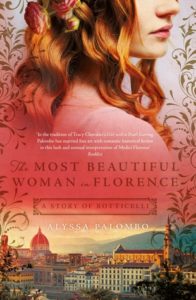 The Most Beautiful Woman in Florence by Alyssa Palombo

First line: It was a large canvas, big enough that it had taken two men to carry it into Il Magnifico’s chambers.

Summary: Simonetta, a new bride to Marco Vespucci, is considered the most beautiful woman in Florence. When she meets the rising star, Sandro Botticelli at the home of Lorenzo de Medici, she becomes the muse for the artist. He uses her as the model for one of his most famous works, The Birth of Venus.

Highlights: I really enjoyed the story. I love the time and the history of the Medici family. They were leaders of the Republic of Florence as well as supporters of the Renaissance in Italy. I had never heard of Simonetta Vespucci before reading this but since I have Googled her to see the paintings done by Botticelli. The writing was well done and flowed nicely. This is a good example of historical fiction. It has just enough history to learn from but is not filled with facts. I plan to read the author’s debut novel soon.

Lowlights: I got tired of the repetition of her being the most beautiful woman and being used to having people stare at her. It is the title of the book. It was too much. I did not need to be reminded.

FYI: Check out the artwork of Botticelli. It is amazing!