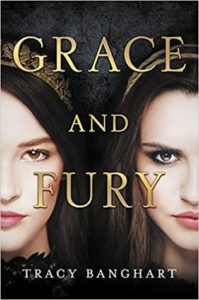 Grace and Fury by Tracy Banghart

First line: Serina Tessaro stood on the steps of the fountain in Lanos’s central piazza flanked by nine other girls her age, all in their finest gowns.

Summary: In Viridia girls are not allowed to read, they must be subservient and bend to the will of men. When sisters, Serina and Nomi, are sent to the palace with a chance of being a Grace and her handmaiden, Serina sees this as a chance to take care of her family. However, when the Heir chooses her younger rebellious sister, Nomi, as a Grace instead, their worlds are changed forever. When Nomi breaks the rules, being able to read, and her sister is the one who takes the blame and is sent to the women’s prison on the isolated island of Mountain Ruin. Nomi has to learn to be a Grace while living under the roof of the Superior while Serina is forced to fight for survival.

Highlights: I found this very enjoyable. I would classify it as a dystopian novel. Going into it, I thought there would be an element of fantasy to it. To tell the truth I was fine without it. It was good straightforward story. I liked the relationship between the two sisters. They truly care about each other and are willing to sacrifice themselves to save the other one. So many stories are centered on romance but this was sisterly love. Each sister had their own strengths that sets them apart. The action was well done. Not overly gruesome or gory. The cover art is beautiful. I enjoyed the supporting characters such as Maris, Malachi and Jacana. I am hoping that we get to see more of them as the story goes on. I raced through the ending. It was fast and gave a cliffhanger that leaves me wanting more!

Lowlights: Several plot lines were predictable. There were similarities between other books of this genre. Even with the similarities, I did not feel like I was reading a rewrite of another novel.

FYI: Perfect for readers of The Selection by Kiera Cass and Red Queen by Victoria Aveyard.