First line: Blood-sodden, the girl staggers into the black.

Summary: A young man is found murdered in his houseboat in Regent’s Canal. As the police look into what happened they focus on three women. The young woman with whom he had a one night stand, the grief stricken aunt and the nosy neighbor. Each one has their own dark pasts with lots of mistakes. And their own reasons to kill.

My Thoughts: This book started great! It felt like it was going to be an exciting story with lots of twists. And it was fun but so much of it seemed to not matter to the whole storyline. Miriam especially seemed like she was just an addition to get the book to a certain page count. Plus there was lots of characters at the beginning. Keeping track of them while listening to the audio version made it hard to keep track of the plot.

I did enjoy the relationship between Irene and Laura. Seeing two women who are lonely and very different be friends and support each other is heartwarming in a murder mystery. I felt bad for both of them throughout the book because of the prejudices against them by society.

I was not surprised by who the killer was. It seemed rather obvious from the beginning as we learn the women’s backstories. With each one we see the connections and can figure out how the story will play out. Especially if you have read other thrillers. But I will say I still had fun reading it and would recommend it.

FYI: From the author of The Girl on the Train.

Broken (in the best possible way) by Jenny Lawson

First line: You probably just picked up this book thinking, What the shit is this all about?

Summary: In her newest book, Jenny Lawson otherwise known as the Bloggess, details her struggles with memory loss, health insurance and taxidermy animals. She is honest and real about her life and people in it but brings humor that gives the reader a giggle between serious topics.

My Thoughts: I love Jenny Lawson. I have read all her books. I went to see her when she visited Wichita several years ago. She brings real topics like mental illness to the forefront but also adds humor to it. She struggles with so much but has been able to overcome a lot with the help of her family. I listened to this, because that’s the best way to read this book, and I was nearly crying while laughing. Her stories can be hilarious and thoughtful.

There were a few chapters that I skipped over when they got too real. Sometimes reading about depression can make a person feel down. I did not want that so I chose to skip them for the more humorous stories. But I think my favorite part of the book was her open letter to her health insurance company. It is ridiculous how these companies treat people. Rather than help they give even more hoops to jump through. Luckily I have never had to deal with something like what she goes through but many people probably do and it is heartbreaking.

FYI: Very serious but also hilarious at times too.

First line: The door opens, and I look up as a man with ruddy cheeks and a crew cut walks into the restaurant, shaking rain from his baseball cap.

Summary: Newlyweds, Annie and Sam, have moved from New York City to Sam’s hometown to be closer to his ailing mother. He finds the perfect location for his psychiatric office in the extra room of an old house. Even though the owner seems to be a little strange he doesn’t let this bother him. Then one night after Sam leaves his office he goes missing. There is no sign of him. As Annie and the police look for Sam they discover thousands of dollars in credit card debt. Did Sam run away? Or is someone else behind his disappearance?

My Thoughts: Though I have never read Misery (but I plan to) I know the basic story line. This was very reminiscent of what I know of the story. Molloy fills her story with lots of twists and turns. Every few chapters something new is revealed. I really enjoyed how fast paced everything was. I would find myself trying to find time to listen to it whenever I could.

The one part of the audio book that I wasn’t too sold on was the voices. At the beginning I thought they did not find actors that fit the characters. And then as reveals happen it makes more sense. So it starts as misleading and then makes sense but also seems to hint at something to come. It helps and hinders the story.

First line: Goldengrove devoured my sister every time I closed my eyes.

Summary: Charlotte Smith is the daughter of a wealthy San Francisco business man. She is engaged to a respectable man. Her manners and comportment are perfect. However, her sister Phoebe has fits of depression or energy. Her parents do not know what to do with her. Their only hope is to send her to a respected asylum for women called Goldengrove. Charlotte loves her sister and is determined to get her out of the asylum. She devises a plan to be admitted to the asylum in order to find and rescue her sister. When Charlotte arrives at Goldengrove she realizes that her plan may not be as easy as she originally thought.

My Thoughts: The story took a little while to gather momentum. The first several chapters were devoted to giving a little backstory but once Charlotte enters the asylum everything picks up. Quoting one of the reviewers I follow on Goodreads, “…the chick in this book is cray cray!!” Why do you think that walking an insane asylum is going to be easy. She figures that she can just waltz out with her sister once she finds her. Even though her main goal is to find her sister, she learns a lot about the struggles that women have to face out in the world. She was raised very sheltered and wealthy where these hardships are not shared. I loved seeing her growth.

Most of the story is told through Charlotte’s thoughts rather than interactions and conversation. This style makes the reading a little slower but as a reader you can tell that the author did a lot of research in order to fill out her novel. Everything down to the specific treatments to the activity at docks in San Francisco.

The other women at the asylum though were hands down my favorite part. Each of them had a story to tell even though we get it in bits and pieces. Hearing how easily a wife, daughter or sister can be discarded is so sad. If you wanted to do or be anything other than what was expected you were clearly “insane”. It makes me want to scream at the injustice that they faced. And the women that were truly disturbed did not get the help they needed. Be ready for a look into a cruel world but it will also give you the feels for how much Charlotte and Phoebe truly care for each other. I hope that I would do something this crazy for my sister if the time ever came around. 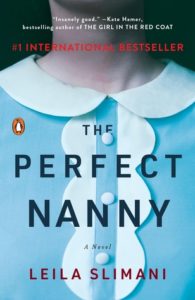 The Perfect Nanny by Leila Slimani

First line: The baby is dead.

Summary: When Myriam decides to go back to work she is tasked with finding someone to watch her two children. Along comes Louise. She is perfect. She works late, cleans the house and the kids love her. As time goes on the family and Louise become even more reliant on each other, which leads to jealousy and resentment.

Highlights: For such a short novel there is a lot of story. It was a slow burn. There are no twists and turns. There is just an underlying darkness to the novel. Louise has a past that haunts her but she seems to overcome it. As we delve deeper into the plot, it becomes apparent to Myriam that the perfect nanny is not quite so perfect. Little things begin to happen. Who is the woman that they let into their life? So much is packed into the pages. It is not the next Gone Girl but it is still worth the read.