I Found You by Lisa Jewell

First line: Alice Lake lives in a house by the sea.

Summary: When Alice notices a man sitting on the beach behind her house in the rain she wonders what he could be doing there but decides not to get involved. Several hours later he is still sitting there. When she takes out a coat to the man she starts to talk to him and learns that he has lost his memory. With no idea who he is or how he ended up on the beach, Alice invites him to stay in her guest house for the night.

Lily Monrose has been married for three weeks. Her husband loves her very much but one night he does not come home. The police look into who he is and where he might have gone. As they search they discover that her husband, Carl Monrose does not exist. Lily is determined to find her husband and get some answers.

My Thoughts: I enjoy everything I have read by Lisa Jewell. Her books have a fun mystery with twists and turns. The story always moves along quickly with intriguing characters and situations. However, I was a little disappointed in this one. I enjoyed the story but it was really predictable. I kept hoping that the ending would have an OMG moment like her newest books have had but it did not. It wrapped up nicely and everyone ended up “happy”.

I did enjoy the characters and the events of the book. I really liked the flashbacks to 1993. It was dark and disturbing. It was the typical Lisa Jewell. Maybe I need to stick to her newer books rather than trying some of her older ones. But if you like a good story than this is one.

FYI: We have an audio version available on Hoopla. 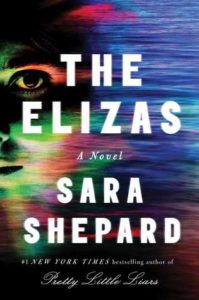 The Elizas by Sara Shepard

First line: I’m screaming as I wake up.

Summary: When Eliza Fontaine, a debut author, is found at the bottom of a pool her family believes that she has tried again to commit suicide. Eliza knows that she was pushed into the pool but cannot remember who pushed her. As she looks deeper into the incident, she learns more secrets have been kept from her. Why is everyone assuming that her upcoming book is a parallel with her life? It is fiction. Or is it?

Highlights: I liked the mystery and fast pace of the second half of the novel. I kept thinking the story was finished but a new twist was added digging deeper into the mystery. The cover was really pretty as well. I really enjoy reading Sara Shepard’s books. She can write a fun story that keeps me coming back for more. Dorothy was a very interesting character. She is flamboyant and eccentric. She added a little fun and spice to the story.

Lowlights: The first half of the novel was slow moving. I nearly gave up on it. I did not like the intertwining with Eliza’s book but as the story progressed, it grew on me. And Desmond was not a character I liked or connected with.