When Women Ruled the World by Maureen Quilligan

First line: In 1558, when John Knox, the radical Scottish religious reformer, published his misogynist tract, The First Blast of the Trumpet against the Monstrous Regiment of Women, he called attention to what was strangely true in the middle of the sixteenth century in Europe: a remarkable number of women had ascended to supreme governmental power.

Summary: During the sixteenth century four women ruled over some of the most powerful countries in the world; Mary I and Elizabeth I in England, Mary Queen of Scots and Catherine de Medici in France. In this book the author looks how they interacted and changed the countries they ruled over.

My Thoughts: I love the history of the sixteenth century. I have read much on Elizabeth I but a lot less on the other three women. It was interesting to hear how they communicated, worked together and supported each other. Even though the ends of the two Marys was tragic they made their marks on history. I really want to know more about Catherine de Medici. She is someone who seems to be misrepresented in many historical fiction and movies.

FYI: Good introduction to each woman and how they came to be in their positions.

*Can be found in audio format on Hoopla or in book through Interlibrary Loan. 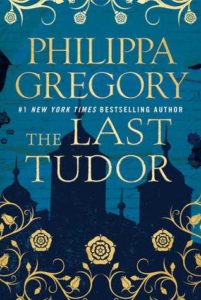 The Last Tudor by Philippa Gregory

First line: I love my father because I know that he will never die.

Summary: The story of the three Grey sisters, heirs to the throne of England. The story is broken into three parts following each of the sisters as they struggle to survive during the reign of their Tudor cousins. Jane is named Queen of England on the death of her cousin, King Edward VI. However, her reign lasts only nine days. Katherine is a young beauty who can only think of love and becoming the heir to the throne. Mary, an invisible member of the court is constantly watching and learning from the mistakes of her sisters.

Highlights: I loved the flow of the narrative. This story felt more like Gregory’s earlier novels. It was more novel than facts and occurrences. I had recently become more interested in the Grey sisters. It was great to have my favorite author cover their lives and loves.

Lowlights: Elizabeth was portrayed as a very vindictive woman. I am sure that she had many faults but part of me wants to continue to think of her as the great queen.