I Couldn’t Love You More by Esther Freud

First Line: I met you at a dance in Ilford.

Summary: No surprise given the title, this is a love story. Or maybe it’s more accurate to say, it’s a story about love. The book follows the lives of three women, Aoife, Rosaleen, and Kate. Their stories span decades and take us from Ireland to England, back and forth in time and place. We see how their lives are linked and how the choices they make have consequences inherited by the next generation. Pages are devoted to showing the daily, tender scenes of mother-daughter bonds. But we also see how these women make seemingly small decisions to keep the peace with their husbands and lose their daughters as a result, suffering in silence. Or in another case, how women unwittingly lose their daughters, pushed by impossible situations and lacking options. Although it can be a tearful read, there is enough redemption in the final pages that you don’t feel you or the characters suffered in vain.

My thoughts: I’ve read a lot of reviews that describe this book as quiet and tender, which it is. Although a lot happens, it is not dramatic. Freud does such a good job of writing it the way real life feels—how we don’t know we’re making a decision that will change the course of our lives and the lives of the ones we love; we’re just doing what seems best in the moment. I like books that feel true to life such as this one, and I was also attracted to it because of its setting in Ireland. There’s just something about that place. My mother was raised in a large, Irish-Catholic family and experienced something similar to one of the women in this book. It isn’t something we speak about, so it was a way for me to try and understand what led her to make the choices she did and imagine how she felt.

The Summer Country by Lauren Willig

Summary: Emily Dawson has inherited a plantation on the island of Barbados from her grandfather. When she arrives at Peverills it is far from what she dreamed. After the slave uprising forty years before it has sat in ruins. On the invitation of the Davenant family of Beckles, she and her cousin stay at the neighboring plantation while Emily decides what to do with her inheritance.

Forty years earlier Charles Davenant returns home to run his family plantation, Peverills. The home he knew as a child has changed and so have Charles’ views on life in Barbados. As tensions rise on the island he must decide where he stands.

My Thoughts: This is a what great family sagas are made of. Big family secrets with dark turns around every corner. I loved the intertwining narratives and how closely they connected. The characters are so well done. I went in expecting to like some and hate others but Willig does a great job of proving you wrong on your first impressions. I am not much for a romance novel but this was a beautiful love story in the midst of so many challenges.

And the history is fascinating. I had never read or heard anything based on the island of Barbados so the storyline was completely fresh for me. Lauren brings it to life. The heat, the smells, and the lifestyles come through in her writing. 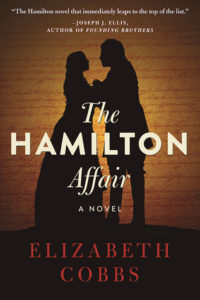 The Hamilton Affair by Elizabeth Cobbs

First line: The boy frowned, pressed a folded handkerchief to his nose, and scanned the crowd for the third time.

Summary: Alexander Hamilton, a Revolutionary War hero and the first Secretary of the Treasury, was born in the Caribbean and moved to the American Colonies to attend college. He was not wealthy but he was brave and smart. Eliza Schuyler, a debutante and daughter of a famous general, is helping the war effort by assisting with the wounded at Valley Forge. When these two young people meet a love story begins. But the story still has its ups and downs even after the war is over.

Highlights: I knew basically nothing about Alexander Hamilton other than what I learned in my history classes, which wasn’t much. I had recently read a book about him but it stopped shortly after his marriage to Eliza. When I found out about the affair he had with Maria Reynolds I was completely shocked. I loved the author’s writing style and the flow of the story. I was completely engrossed in this story and I learned a lot. The pacing is really well done. I would recommend this to anyone who wants to read more about the man who has become a pop culture phenomenon.

Lowlights: The political intrigue and problems with fellow founding fathers was a little confusing to me. It may all fall on my lack of detailed knowledge of the founding of the United States and all the problems that went along with it. I never realized that there was so much opposition to the changes and that they believed that Hamilton was interested in being King even though he fought so hard to end the rule of England over the colonies. Some of the pieces with the animosity with the fellow politicians was a little too much but it was building up to what led to the duel with Aaron Burr.

FYI: Great history lesson. Get the information that you missed in high school history. 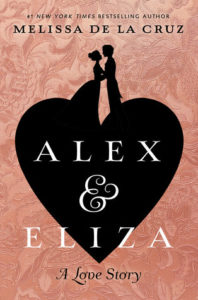 First Line: Like a latter-day Greek temple, the Schuyler family mansion sat atop a softly rounded hill outside Albany.

Summary: Eliza Schuyler is the daughter of a wealthy general.  Alexander Hamilton is the right hand man of General George Washington.  When the two meet at Eliza’s home, the first encounter is not the one of fairy tales.  However, when they meet up again several months later their friendship grows and a romance for the ages is born in the midst of the American Revolution.

Highlights: This is a very quick read and great for a first book about Alexander Hamilton.  With the popularity of the musical, Hamilton, this book is appearing at just the right time.  I know very little about the man who had a key role in the establishment of our country.  I am a huge fan of Melissa de la Cruz.  I think she does a good job of bringing this story to readers in a YA version.

Lowlights: The book is almost more juvenile than YA usually are.  I expected a little more surrounding the war.  I do plan to read the next one as well.

FYI: Perfect introduction into the story of Alexander Hamilton.