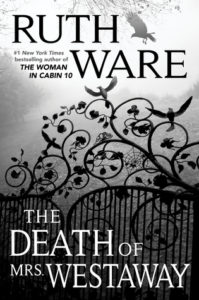 The Death of Mrs. Westaway by Ruth Ware

First line: The magpies are back.

Summary: When Harriet Westaway receives a letter from a lawyer she is confused by its contents. It is informing her that her grandmother has died and that her presence is needed at the reading of the will. Harriet has never met her grandmother. She never even knew she had one. Maybe they got the wrong person. Nevertheless, with a loan shark hounding her for money and bills piling up she decides to see what is behind this letter. Upon arriving at Trepassen she meets the rest of her “family”. Can she deceive these people and take their money? On the other hand, is there more here than she thought?

Highlights: This is by far Ruth Ware’s best novel. It took me a while to read but not from lack of interest. I liked Harriet. She is a young girl in an impossible situation. She does the best she can to take care of herself in an uncertain world. I really enjoyed the diary entries that give the reader a peak into the past and snippets of facts pertaining to the mystery. I kept coming up with new scenarios and answers. Ware did a great job setting up each little twist and turn. In addition, I was truly a little frightened by Mrs. Warren. She was always there with some dark comment or ominous look.

I didn’t mean you—I just meant—well, look, Mrs. Warren’s always had a touch of the Mrs. Danvers about her.

Lowlights: The loan sharks were the driving force to get the story started but then the threat disappeared as the plot progressed. I understand that they were just a starting point for why Hal decided to impersonate the Westaway heir but if it was a big part of the beginning maybe it should make an appearance at the end?

FYI: Ruth Ware is also the author of The Woman in Cabin 10 and The Lying Game.