Summary: Meet Ghoulia, a young (well, she’s a zombie, so who’s to say how young she actually is) zombie who lives in a spooky old manor with her lively assortment of dead family members. The narration explains how our protagonist passes her days, and some (or most) of the activities are definitely exclusive to members of the undead community. But, as Cantini puts it, “. . . to Ghoulia, her life seemed perfectly normal.” While spooks abound at home, the scariest obstacle Ghoulia faces is making friends with the living and breathing children who live in the nearby village.

I won’t spoil the ending, but I definitely recommend checking this one out! I enjoy reading younger grade fiction, so I can better recommend stories for the kids who come by to ask for recommendations, and while this book is definitely aimed at kids who are ages 6-8, it can be a fun and quick read if you’re a grown up, too!

My Thoughts: This is a book for anyone who’s ever felt a little different (which, I think, is probably everyone). At one point, Ghoulia plays dress up, and she disguises herself as a living, human child. You can take this story literally, and watch as a lonely zombie tries to find friends, and still enjoy the story. But if you look at Ghoulia long enough, you’ll start to see yourself, and the wonderful part is, nearly anyone can relate to her, even if you’re not a member of the undead community (although many of us are before coffee). Whatever part of you that makes you feel so different from other people, that’s the Ghoulia side of you, and it’s something we all share. Maybe when you see Ghoulia, you won’t relate to her now, but you’ll remember when you did. Maybe you’ll remember how you felt after someone you loved hurt you and how you had to learn to trust that people can be kind. Maybe you’ll remember how you felt in high school or middle school, or whenever you were most unsure about what would happen if someone met “the real you.”  I know there are so many, but I love books that teach kids it’s okay to just be yourself. It’s a trope that I’ll never tire of, honestly.

First line: The mystery of the missing twins could never have been solved by an ordinary detective.

Summary: Living in the cellar of 221B Baker Street is the legendary mouse detective, Basil. He and his companion, both admirers of the famous Sherlock Holmes, spend their time solving mysteries in the mouse world. When two young mice twins disappear it is Basil that the community turns to. As he searches for clues he discovers that it is none other than the Terrible Three. With his faithful companion by his side the travel to the English shore to find and return the missing twins.

My Thoughts: Summer reading at the library started this week! It is always a busy and fun time here at the library. To start off the summer I picked a children’s book for my review.

This is the first story in The Great Mouse Detective series by Eve Titus. It was the inspiration for the movie of the same name by Disney. And also happens to be one of my favorite Disney movies. It was a cute story and lots of fun for young readers. It will definitely be a gateway for kids into the world of Sherlock Holmes. I liked that the book had illustrations. The author even gives a list of characters at the beginning of the book. I think this will appeal to younger readers. I would definitely recommend this to young patrons looking for a good and clean mystery.

*This is my pick for category #4 (A speed read (less than 100 pages)) for the ReadICT challenge.*

It has been just over one week since the start of the Forbidden Forest Read-a-thon here at the library. And boy has it been one heck of a week. You do not realize the pressure you are under when you are given a set number of books to read in just a month! It is a little intimidating.

Going into the challenge I figured that this would be a piece of cake. I have already read over 100 books this year. Twelve books should be easy right?! I have finished three at this point which is a fairly good place to be but they were the shorter ones. Several on my list are hovering around five hundred pages. Yikes! Maybe I was overly ambitious but I am determined to finish this challenge.

So far I have finished reading A Little Princess by Frances Hodgson Burnett, We Have Always Lived in the Castle by Shirley Jackson (we own the movie but not the book) and The Umbrella Academy: Apocalypse Suite by Gerard Way. Each has had their ups and downs but I would say my favorite so far has been The Umbrella Academy graphic novel. I have even read book two and have three on my desk for later.

First line: It was the same year “Tusslin’ Tom” Gurney knocked out the space-squid from Rigel X-9…

Summary: At the exact same moment forty-three babies were born to women who had previously not been pregnant. Of the forty-three newborns born, seven of them were adopted by the eccentrically wealthy Reginald Hargreeves. He knew that there was something special about these children. For years they lived quietly hidden away in his mansion until one day when they reappeared in order to save the world. They called themselves The Umbrella Academy.

My Thoughts: I am not one that is much interested in graphic novels but they are slowly growing on me. I have now read a handful and started to enjoy them. The Netflix show based on the graphic novels is why I chose this book for the reading challenge. There are many similarities between the two but lots of differences as well. Each stand well on their own. The art is very interesting to look at. It is not realistic but it is not too cartoonish.

I liked the story because it is dark and imaginative. The authors create such an interesting world that it is not hard to get sucked into it. One of the characters, Number One or Luther, is part man and part ape. He is gigantic and spends quite a bit of his youth on the moon. Who thinks this stuff up? It is different which makes it fun. I am looking forward to book three and on.

FYI: There is a lot of violence which did not affect me at all but it may be too much for younger readers. This is book one in the series. 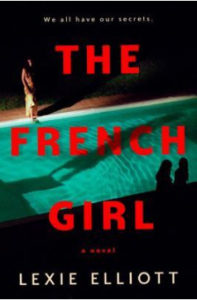 Feb. 20: The French Girl by Lexie Elliott
Six close friends from Oxford spend what they hope will be the perfect summer getaway together in a farm house in France. And it is, until they meet the girl next door — Severine. For Kate, Severine is an unwelcome presence, who undermine’s the groups loyalties. Kate knows that after a huge blow-up on the last night of the the holiday, that things are not ever going to be the same. Some actions are unforgivable and some people are unforgettable, even if they are never seen again. But a decade later, Severine’s body is found. Suspicion begins to swirl around Kate, who finds herself buried in deception and has no one to help her get free.

Feb. 20: The Woman in the Water by Charles Finch
The latest in Charles Finch’s Charles Lenox mystery series takes the reader back to Lenox’s first case in 1850. Lenox is struggling to make a name for himself as a private detective, and Scotland Yard refuses to take him seriously. An anonymous letter sent to the newspaper is from a person who claims to have committed the perfect crime, and in the letter they promise to kill again. Lenox believes this is his chance to prove himself. The killer’s sights end up set on those closest to Lenox, and he ends up in a deadly game of cat and mouse. 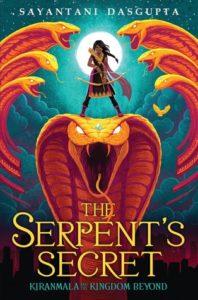 Feb. 27: The Serpent’s Secret (Kiranmala and the Kingdom Beyond #1) by Sayantani DasGupta
Kiranmala is just a normal New Jersey sixth grader when she wakes up on her 12th birthday. Then her parents disappear and a demon blasts through her kitchen trying to eat her alive. Her parents had often told Kiranmala fantastical stories — like that she was really an Indian princess. Then, two swoon-worthy Indian princes show up at her door trying to rescue her. Now she’s sucked into another dimension: one full of magic and mythical creatures and magical maps. She has to solve riddles and avoid demons and try to avoid the things that want to kill her, while trying to find her parents and basically save New Jersey.

Feb. 27: The Shape of Water by Guillermo del Toro and Daniel Kraus
Typically, the movie comes after the book, but in this case it’s the other way around. The highly rated movie, which is still out in theaters, was released a couple of months ago. Critics have said that director Guillermo del Toro was “at his visually distinctive best” with this film. He has joined forces with author Daniel Kraus to tell this love story in novel form. Elisa Esposito is mute, and works as a janitor in a research center in 1962. One night she sees a creature she isn’t supposed to, and it eventually becomes her sole reason for living. io9 says in its review that the movie and the book tell this spectacular story in two very different ways. 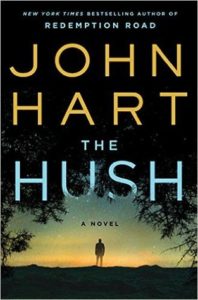 Feb. 27: The Hush by John Hart
This book takes the reader back to the world Hart introduced in The Last Child. But you don’t have to read that book before you read this one. Johnny lives alone, 10 years after the events that changed his life. Books have been written about his exploits, and people are curious, but Johnny works hard to maintain his privacy. His one connection to his past is with his childhood friend, Jack. Jack senses danger in the lands Johnny lives on, but Johnny doesn’t want to discuss it.