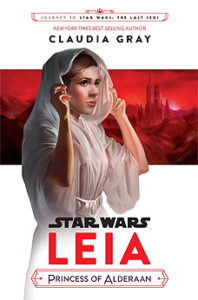 First line: The Day of Demand had been announced months before.

Summary: Leia Organa, the princess of Alderaan, has just turned sixteen. In order to be named heir to the throne she must complete three challenges. One for the body, the mind and the heart. As she sets off on humanitarian missions or working in the Apprentice Legislature or climbing mountains her mind is still on her homeland and her parents. Things have not been the same between herself and her family in last few months and she wants to know why. As her life in politics continues to expand, she is seeing the galaxy is fracturing and she has to decide which side she will be on.

Highlights: I have been a big fan of Star Wars since I was a child. Leia has always been a favorite of mine because she is a strong and independent woman. She fights her own battles. This look into her years before the start of the saga gives insight into where this princess learned how to shoot blasters and learned the politics of the Empire. There are many easter eggs and name drops that tie into the all the movies. It is easy to see the time that it takes place in the timeline. It was nice to be introduced to Leia’s mother The author did an amazing job of bringing to life the back story of one of the greatest female characters.

Lowlights: It is very much YA. There is romance between teens. Conflict with parents. Teenage angst.