Summary: Hedy Lamarr, once considered to be the most beautiful woman in the world, was an actress and an inventor. She was born and grew up in Austria. However, when Europe seemed to be on the brink of world war, she fled to England and then the United States. Upon arrival she started her career in Hollywood. She starred in blockbuster films, married multiple times and lived the life of celebrity. But she also had a secret. She was a scientist. She loved inventing things and learning about the world around her.

My Thoughts: Several years ago, I read The Only Woman in the Room by Marie Benedict, where I learned about Hedy Lamarr for the first time. It was a wonderful story about a fantastic woman. She was greatly overlooked for her inventions and only remembered for her looks. I love that people are now realizing her greatness.

I loved this version of her life. Graphic novels are becoming a form of literature that I have been more open to recently. I loved the artwork. It was all beautifully done and had lots of detail. Sometimes I find myself overlooking the art in a graphic novel but this one I took my time to look longer at the scenes before turning the page. If you are looking for a quick read and want to learn something new then this is perfect for you.

FYI: This is available on Hoopla only.

Holidays On Ice by David Sedaris

First line: I was in a coffee shop looking through the want ads when I read, “Macy’s Herald Square, the largest store in the world, has big opportunities for out-going, fun-loving people of all shapes and sizes who want more than just a holiday job!  Working as an elf in Macy’s Santaland means being at the center of the excitement…”

Summary: In his holiday collection of essays, David Sedaris covers topics from his time as an elf in Santaland at Macy’s, holiday traditions in other countries and his family’s traditions.

My Thoughts: I am not one who looks for holiday books to read at Christmas time.  But this book is the exception.  Ever since I was introduced to this collection I was hooked.  I listen to it every year.  I love to hear about his time in Santaland. It is my favorite part. But I do enjoy when he questions people on his travels about their local traditions. I wish I would have thought about this while traveling abroad.

It is best enjoyed as an audiobook.  David reads it himself which adds an extra bit of wonderfulness to the stories.  No one can deliver the lines like he can.  I laugh every time I hear it.  I was so happy to find that it is available on Hoopla, so I can listen to it whenever I want!  If you are looking for something funny for your annual holiday read than this is my recommendation.

FYI: If you are easily offended then this may not be the book for you but we do have lots of other Christmas titles available on our displays!

I had never heard of Erich Kastner before my recent trip to Dresden, Germany.  I passed by the museum dedicated to him and his work several times.  My German sister, Elisabeth, told me that I needed to read some of his books.  I was lucky to find two on Hoopla. Luckily we have such an amazing database available for our patrons where they can find obscure books, music and movies. While I was searching I even stumbled across the fact that patrons can check out items in foreign languages as well. As I continue to work on my German I will keep this in mind to help with my study.

Lisa and Lottie is a story that is very well known but under a different name, The Parent Trap. Who knew?! Not me for sure.

*This is only available via Hoopla or interlibrary loan.*

Lisa and Lottie by Erich Kastner

First line: Do you happen to know Bohrlaken?

Summary: When Lisa from Vienna meets Lottie from Munich at summer camp, they realize that they are identical twins who have been separated at a very young age. During the weeks at camp they devise a plan to switch places without telling their parents.

Highlights: This was a fun little story that I know very well. I have watched both versions of The Parent Trap (Hayley Mills and Lindsay Lohan) and loved them. Kastner’s story is a little less detailed than the movie versions but still a fun novel for young kids. The illustrations were very simple and worked well within the story especially when we see the twins together. I am glad that I picked this up and I plan to read a few more of Kastner’s books as well.

FYI: This is only available in digital format on Hoopla or you can interlibrary loan it as well.

We recently added a new service called Hoopla!  It is a website/app that patrons can use to check out ebooks, audiobooks, TV shows, movies and music on their devices.  Each patron is allowed eight items a month.  The

items range from new and popular to the classics.

I have started to play around with it a little bit.  I like that there are a wide variety of books, old Disney movies, British TV shows and soundtracks available.  I recently realized that I can even add the app to my Fire Stick and stream the movies on my TV!  How cool is that?!

One of the features I found most intriguing even though I do not read a lot in the genre is graphic novels.  The site has a very good selection.  While enjoying the story the reader can hover their mouse over the images to enlarge them (because sometimes that print is very small). This also helps when looking at the artwork and seeing more of the details. 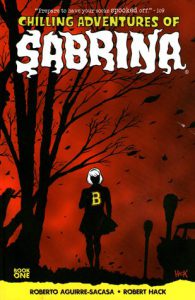 The Chilling Adventures of Sabrina by Robert Aguirre-Sacasa

Summary: Sabrina Spellman, a teenage witch is the daughter of a mortal and a warlock. On the eve of her sixteenth birthday she has to make the decision to join the Church of Night. She is currently living with her two maiden aunties in a funeral home.

Highlights: I picked this as one of my first items to check out from Hoopla. I had recently watched the new Netflix series based on the graphic novel and I watched the original TV show as a teenager. I enjoyed the stories in the first volume. They are very dark! The art work is very interesting.  I never read the Archie comics (which these are a spinoff of) but several characters from their universe appear in the Sabrina stories.

So if you are expecting the nice and bright Melissa Joan Hart version this is not it. Salem, the cat, is still here as well as her aunts, Hilda and Zelda, but after that everything is different.

Lowlights: Since graphic novels are more centered around the art work the stories are much shorter. I wanted a little more story but I guess I will just have to check out volume 2 for that.

FYI: There is very dark themes and imagery.