The Guilt Trip by Sandie Jones

First line: The policeman, with the slicked-back hair, stands at the bottom of my hospital bed, staring at me intently.

Summary: Rachel and Jack, along with their best friends, Paige and Noah, have traveled to Portugal for a wedding. Jack’s brother is marrying the young, beautiful and impulsive, Ali. Even before the trip starts secrets start to reveal themselves about who Ali really is. Jack says he had a coworker tell him about an affair he had with Ali. And as the trip progresses Rachel begins to believe that this is a cover story for an affair between Jack and Ali. As more clues come to light, Rachel is convinced that her marriage is not what she thought it was. Does she ruin the weekend and tell the secret or does she wait until it is too late?

My Thoughts: I was unbelievably disappointed in this story. It was like a high school drama. So many worries about someone kissing someone else, insinuations, flirting, innuendos and lots of drama! Rachel was worried just because she felt insecure. Then her friend continued to feed into the insecurity. It was a lot of hearsay and bad timing. I was just so done with it about half way through but I kept going hoping that it would redeem itself or bring it to a satisfying conclusion but it was a silly ending. Not Sandie’s best book.

FYI: Skip this one unless you love relationship drama.

Survive the Night by Riley Sager

Summary: Two months earlier, Charlie’s best friend, Maddy was murdered by the Campus Killer. But what makes things even worse is that Charlie could have done something to stop it from happening. She blames herself. And the only way she feels that she can move on from this tragedy is to leave school and go home to try and heal.

At the university ride board she meets a young man who offers to drive her home since it is on his way. Charlie is so desperate to leave Olyphant that she accepts. But as soon as she gets into his car she starts to wonder if she has made a terrible choice. Little things start to happen which makes Charlie wonder if Josh is not what he seems. Will she survive the long night time drive?

My Thoughts: I had so much fun reading this book! I kept having to tell myself to relax. I was caught up in the tension and fear. It immediately sucked me in. And Charlie is a very unreliable narrator since she has a disorder that takes her out of reality if things become too much for her. As I read I never knew what to believe and what is one of the movies in her head.

Riley Sager’s books always have the feel of an eighties horror movie. That may be one of the reasons I love them so much. They can be cheesy at times but that is how I want an eighties movie to be. There was lots of twists and turns. I did not expect the ending at all. Some things seemed a little obvious but I was very shocked by big reveal. I would highly recommend this to anyone who wants a fast and fun thriller for the summer. It hits the spot perfectly.

FYI: Violence, murder, and some language. 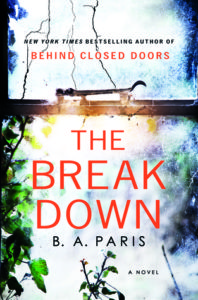