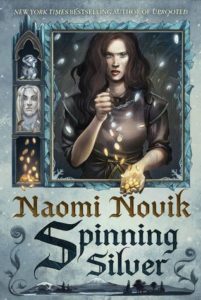 First line: The real story isn’t half as pretty as the one you’ve heard.

Summary: When Miryem takes over her father’s money lending business she excels at it. She has a talent for making silver into gold. Slowly bringing her family out of poverty, she garners a reputation but it may not be as all she thought it would be. She draws the attention of the Staryk king, a creature of ice and cold who preys on the people of Vysnia.

Highlights: This book is beautiful! It has classic fairy tale themes, Rumpelstiltskin, and the feeling of a Russian folktale. I wish that I had read this in the dead of winter because it is very atmospheric. The story is dark and rich. So much detail and story is packed into it that it takes a while to digest. This is not a summery beach read but one that needs to be savored.

There are at least six points of view throughout the plot and each character has a symbol to represent them. It is a nice touch to separate the narratives. Each character brings their own voice and thoughts to the story. Miryem is the moneylender’s daughter who is stolen away by the Staryk king. Wanda, the servant girl, gives us a peak into the prejudices of the village folk but also the wonder of girl who has been given a chance to better herself. Her younger brother, Stepon, is the innocent who watches and does not completely understand what is happening around him. Irina, the daughter of a duke, has been forgotten and neglected until her father hatches a plan to ensnare the Tsar and therefore putting her in danger. The young tsar, Mirnatius, has a dark secret. And finally Magreta, the nurse who raised Irina and is determined to keep her young charge safe.

With so many plot lines intertwining you would think it would get confusing but it does not. They all come together and conclude the story. The last few chapters are fast paced and the perfect way to end. Be prepared to spend time with these characters in this world. It is a hearty read but worth it.

The Staryk was a tale for a winter’s night.

Lowlights: I love the detail of the story and the characters. Every few chapters though felt a little longer than they needed to be. I am a fan of short chapters so when one stretched on for 50+ pages it took me a little longer to get through.

FYI: Read Uprooted by Naomi Novik. It is fantastic! It is a retelling of Beauty and the Beast which is my favorite fairy tale.