First line & Summary: To the children of J. R. R. Tolkien, the interest and importance of Father Christmas extended beyond his filling of their stocking on Christmas Eve; for he wrote a letter to them every year, in which he described in words and pictures his house, his friends, and the events, hilarious or alarming, at the North Pole.

My Thoughts: The Hobbit is one of my all-time favorite books. I have read it numerous times, I own several copies, watched all the movies and even have a lanyard with the map on it. Tolkien wrote magical worlds filled with interesting characters and I have loved each story. However, I had never seen this book before.

I figured since it is Christmas time that this book would be a perfect quick read. It is beautifully created using images of the letters and drawings that Tolkien wrote to his children from Father Christmas. Each year he builds on the stories and characters such as Polar Bear and the snow babies and their shenanigans. As he brings to life the world at the North Pole he also reminds his kids about some of the hardships that other families are dealing with during the depression era and beginning of the Second World War.

I am glad that the author decided to transcribe the letters because they can be a little hard to read at times but being able to see the actual letters makes them even more enchanting. I can imagine the kids’ joy when they received the letter from Father Christmas. I am very thankful that the family saved and shared these little peeks into the lives of the Tolkien Christmas tradition.

FYI: Perfect for fans of Tolkien!

*This can also be found on Hoopla and Libby.

Working the front desk gives me lots of opportunities to talk about books with patrons and give suggestions. Recently, one of my favorite patrons asked if I had read any Zane Grey books. I told him that I had only read one, Betty Zane, which was one of his first novels about the heroine of the American Revolution.

About ten years ago while doing a family history project in college I learned from my grandmother that our family was distantly related to the author, Zane Grey. Through my research I found that my 6x great aunt married Ebenezer Zane, the brother of Elizabeth “Betty” Zane. How cool is that?!

On a trip to Ohio several years ago while doing some more family history research I visited the grave of Betty Zane. It is a wonderful monument to the strong young woman whose bravery helped save her family and Fort Henry.

On a trip to Ohio several years ago while doing some more family history research I visited the grave of Betty Zane. It is a wonderful monument to the strong young woman whose bravery helped save her family and Fort Henry.

He astoundingly had never read this one. I immediately interlibrary loaned it for him. And since I recommended that one for him he suggested I read his favorite Zane Grey novel, Wyoming.

First line: When Martha Ann Dixon found herself on the open Nebraska road she realized with a shock that at last her innate propensity for running away from home had definitely materialized.

Summary: When Martha Ann Dixon, a young girl from Chicago decides to lie to her parents and hitchhike out to Wyoming to live with her great uncle, she does not know how her life will change. Along the way she meets a wide variety of people, some good and some bad. However, one man stands out, Andrew Bonning. He rescues her from some tramps along the road and gives her ride. Little does she know that they are both heading to the same place. As they get to know each other their feelings become stronger while they try to navigate life in the West.

My Thoughts: I enjoyed reading my second Zane Grey novel. It was a light and easy read. I am not much for love stories or westerns but it was a sweet novel. I did get a little frustrated with the stubbornness of the two main characters. It reminded me of Pride and Prejudice in that way. The supporting characters are sometimes the most fun though. Even though he is considered one of the “bad guys” at a point in the story, I enjoyed the scenes with Texas Jack. He was a true cowboy and added a little bit of humor to the story. The one thing I really had trouble with was the writing. It was good but when it is in the western vernacular it can get hard to understand and read easily.

FYI: If you want a nice western love story than this is a good one for you!

Summary: Filled with helpful tips on how to plan, research and preserve information that can be found at cemeteries. This book describes different symbols, types and information about gravestones and their meanings. It also walks the reader through websites and online tools that can help a novice or experienced genealogist on their journey of discovering their family history.

Highlights: I loved seeing the different types of stones and the symbols with their meanings. I never considered that the type could tell you about the finances or social status of my ancestor. All the hints and tips about ways to search for information were helpful. As I was reading, I would open a browser and try them out on my tree. I have a few illusive ancestors and I tried using the tips to discover more about them. I still have not found their death dates but I have learned other little tidbits about their lives. I hope to continue to find more with time.

Lowlights: There was a lot of information that I was familiar with so it was a little slow going through that but at no fault of the author. I like that they walk the reader through the process of signing up and searching.

FYI: Perfect for any genealogist. 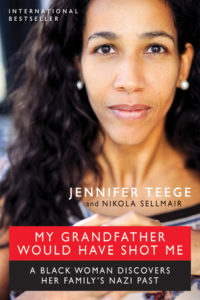 My Grandfather Would Have Shot Me by Jennifer Teege, Nicola Sellmair, and Carolin Sommer (translator)

First line: It is the look on the woman’s face that seems familiar.

Summary: Jennifer Teege was shocked when she learned about her family history while browsing her local library. When she picked up a book and scanned the pictures inside, she was shocked to see her biological mother. As she continued to read, the book followed her mother’s struggle to love her father, Amon Goeth, who was the commandant of the concentration camp depicted in the movie Schindler’s List. Jennifer was adopted at a young age but she had had contact with her biological mother and grandmother as a child. She was never told her family’s past and now she has to come to terms with what they did and did not know.

Highlights: Fascinating story! I have visited Dachau in Germany and felt the heaviness that still surrounds the place. I read this in two days because I had to know more about her and what she learned. The story is interspersed with information and interviews done by one of the coauthors. The pictures were a great addition so I could see what the people looked like.

Lowlights: Some places were a little repetitive. She kept reiterating several key points. I think that it was a strategy to remind the reader but since I read it very quickly they were redundant.

This book was something I came across when checking in returns and was immediately struck by the title.  I saw the movie Schindler’s List many years ago but I remembered the basics of the story.  I was extremely interested in anything to do with World War II and the Holocaust.  I have read The Diary of Anne Frank, Numbering the Stars by Lois Lowry, The Summer of My German Soldier by Bette Greene and so many more. I have been able to visit Germany four times and see historical sites but nothing can prepare you for visiting one of the concentration camps.

My first visit to Dachau, the first concentration camp in Germany, was when I was about 10 years old.  It was a scary and disturbing time.  I remember asking to go sit outside because I was getting physically sick. I was able to visit a second time when I was in college and could understand the significance of the place and its history.

I re-watched Schindler’s List recently and was once again shocked by the brutality.  Spielberg and his film convey the heaviness that these places still carry decades later.

It is important to remember these events and learn from them.  As the monument at Dachau says, “Never Again.”