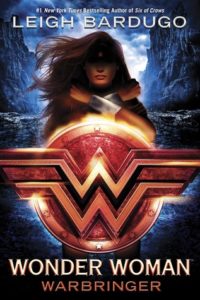 First line: You do not enter a race to lose.

Summary: Diana was born on an island of immortal women called the Amazons. Her mother is the queen of the Amazons. She has never been off the island or even met a man. When Diana sees a shipwreck off the coast of the island, she breaks the laws of her people and rescues a young girl from the wreckage. However, once Alia, a young student, is brought onto the island mysterious things begin to happen. In order to save her home and her fellow Amazons Diana has to take Alia off the island and break the curse associated to her lineage and blood.

Highlights: I loved the Wonder Woman movie so I had to read this! I have never read anything by Leigh Bardugo but I will have to now. I liked the adventure and action. It was fast paced and fun. This was a good reimagining of one of the best female superheroes. Diana is strong willed and brave. She is a role model for young girls.

Lowlights: I was thrown off at the beginning because the story takes place in modern times. Diana is a teenager that is still training to be an Amazon. This is a different spin and completely different from the movie. It took me a while to get used to the idea but it worked well.

FYI: This is the first in the DC Icons series. Next is Batman by Marie Lu, Catwoman by Sarah J. Maas and Superman by Matt de la Pena.