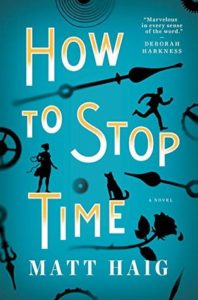 How To Stop Time by Matt Haig

First line: I often think of what Hendrich said to me, over a century ago, in his New York apartment.

Summary: Tom Hazard may look like an ordinary man but he is anything but. He is several hundred years old. He has seen the world change from Elizabethan England to the modern era. Sounds like a dream right? Maybe so but it can be lonely. When a group called the Albatross Society discovers him, he learns that there are many more people like him. Their main rule is to never fall in love. It complicates things. Tom has led many different lives but now he takes on a role that could jeopardize his existence, a history teacher. When he intrigues a fellow teacher, he has to decide if it is worth it to break from the rules of society or start over again.

Such a great story! I love the thought that someone can live forever and see so many things. I would love to be able to see the world of Shakespeare and the Roaring Twenties. These are iconic times in history. Being a history major, this book was right up my alley.

“It’s not that long ago, not really. History is right here, Anton. It’s breathing down our necks.”

I like that Tom does age. He is not immortal. He just ages slower than the average person does. He has demons. He wants to know what and who he is. He feels guilt. He knows love. He is a flawed character instead of the perfect ones in many stories of immortals. He has made mistakes and learned from them. He has not collected tons of wealth and profited off his condition. He has lived. He has searched for years for someone and never given up.

Lowlights: I listened to part of this on audiobook. The reader was good but when there are many changes from time and location it makes that story harder to follow. Tom often looks back at his past in order to help explain his present. However, while reading it flowed much easier.

FYI: It is already optioned to be a movie starring Benedict Cumberbatch!