Summary: Hedy Lamarr, once considered to be the most beautiful woman in the world, was an actress and an inventor. She was born and grew up in Austria. However, when Europe seemed to be on the brink of world war, she fled to England and then the United States. Upon arrival she started her career in Hollywood. She starred in blockbuster films, married multiple times and lived the life of celebrity. But she also had a secret. She was a scientist. She loved inventing things and learning about the world around her.

My Thoughts: Several years ago, I read The Only Woman in the Room by Marie Benedict, where I learned about Hedy Lamarr for the first time. It was a wonderful story about a fantastic woman. She was greatly overlooked for her inventions and only remembered for her looks. I love that people are now realizing her greatness.

I loved this version of her life. Graphic novels are becoming a form of literature that I have been more open to recently. I loved the artwork. It was all beautifully done and had lots of detail. Sometimes I find myself overlooking the art in a graphic novel but this one I took my time to look longer at the scenes before turning the page. If you are looking for a quick read and want to learn something new then this is perfect for you.

FYI: This is available on Hoopla only.

First line: If great talent can arise from adversity, mine must have been forged in the cauldron of my childhood.

Summary: The most famous actress of her time, Sarah Bernhardt, rose from obscurity to stardom in France. She was the daughter of a high-class courtesan. She is raised in a convent until her mother decides to start her in the family trade even though Sarah has hopes of being an actress. With the help of influential men like Alexandre Dumas she gets her chance to shine of on the stage and become a worldwide superstar. But even with stardom comes tragedy too.

My Thoughts: Before reading this I had never heard of Sarah Bernhardt but after finishing it I want to know even more. Her life had so many ups and downs. She achieved so much in a time when women still had very little power. She used her skills and strong will to rise. She may have had help but she knew who she was and what she wanted and took it. And she used her influence to help others like during the Franco-Prussian War, another event that I knew very little about.

Unfortunately, most of Sarah’s work was on the stage and before motion pictures and sound but there are a few examples from early recordings that can be found on Youtube. Even though her acting would be out of date in the present at the time it was revolutionary. She changed the way actors spoke to the audience and portrayed the characters on stage. We are lucky to have any piece of her and her skills available for us to see.

Gortner is a phenomenal historical fiction author. He really makes the story gripping. He brings the women he writes about to life. I learn more about the time period then I have ever known while being entertained by the story.

FYI: I highly recommend Gortner’s last book, The Romanov Empress, about the mother of Czar Nicholas II of Russia. 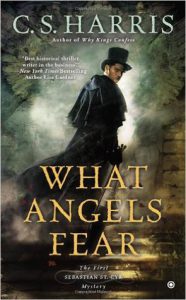 What Angels Fear by C.S. Harris

First line: She blamed the fog.

Summary: When a young woman is found murdered on the steps of Westminster Abbey all the signs point to the young viscount, Sebastian St. Cyr. In order to prove himself innocent he uses his skills gained from his time in his majesty’s military as well as enlisting the help of his former mistress, Kat Boleyn.

Highlights: As a fan of historical fiction this has become one of my favorite mystery series. Sebastian is a smart and witty protagonist. The street urchin, Tom, is a great addition. He is fun and gives the reader a look into the darker underworld of the poor in London. I love that Sebastian is involved and cares about others unlike many of the people in the upper classes. I have read nearly all of this series so far and have even gotten my mother hooked on them as well.

The author does an amazing job of researching the time and drawing in historical figures. While reading this I can even connect it with the PBS show, Victoria, even though it happens about 25 years before her reign. In one of the most recent books we get introduced to Princess Charlotte who is the future wife of Uncle Leopold.

Lowlights: Sebastian may be a little too perfect. He knows a lot people and can handle about any situation. However, this can be said for most primary characters. It seems a little cheesy but it is easily overlooked because the story is so fun.

FYI: If you like this then try The Pink Carnation series by Lauren Willig. It is a female centered spy novel series that takes place during this time period. 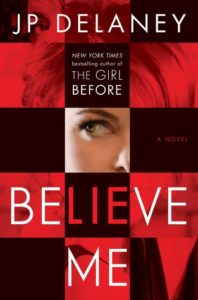 Believe Me by J.P. Delaney

First line: On the day of departure, guests are requested to vacate their rooms by noon.

Summary: When British acting student, Claire, is struggling for money to pay rent she starts work at a decoy for a law firm in order to entrap straying husbands. However, on her last job the wife ended up dead the next day. In order to find out who the killer is they ask Claire to try to get a confession out of the husband. As she immerses herself into her character, the lines between the act and reality begin to blur.

Highlights: In the second novel by J.P. Delaney we get a twisty psychological thriller. I was certain I had the story figured out. I was wrong. There were so many decoys and little tidbits that make the reader believe one thing when it can mean something completely different. The story was FAST! I could not believe how quickly I read this and how hard it was to put down. I loved being inside Claire’s head even though it got a little troublesome at times. The way she viewed everything as a production was a fun styling choice for the author.

Lowlights: I do not believe there were many lowlights other than the fact that it is not something new or astounding. It is a great read but it is not groundbreaking. Enjoy it but do not look for the next Gone Girl.

First line: I’m not qualified to write a book.

Summary: Anna Faris, actress and the host of a podcast, is writing her first book. She details her life, career and advice she has for her podcast listeners. Written in an informal style, as if she is talking to the reader. Her wit and sense of humor comes through in her writing.

Highlights: I have been a fan of Anna Faris for many years. I have seen most of her movies and always make time to watch her TV show, Mom. She is funny and heartfelt. However, she is very truthful about the struggles of life in Hollywood and in the public view. I like her even more after reading this. She may be unqualified but she does a great job!

Lowlights: It was a little hard to read after the recent announcement of her separation with her husband, Chris Pratt. I also felt like some of the conversations from the podcast seemed a little out of place. I understand that it makes it easier to fill some pages and cover topics that she has already covered on the show.