Oversize white cotton underwear can hold seven children. This is what Hannah Adamson discovered when she presented an underwear-themed story time to the Derby community. Adamson has been a member of the Derby Public Library Youth Services staff for over five years and has led the Preschool Storytime program for a year. By incorporating books, songs, flannel stories, and interactive iPad games into her program, Adamson has increased attendance and inspired young children to think, create, and explore.

Her story time reached a new creative level when she thought of the underwear. Having discovered numerous pictures books with an underwear theme, Adamson decided to try something different. The response to this idea was unprecedented.

We read books related to underwear, danced to a song about getting dressed, and watched an adaptation of The Emperor’s New Clothes. The best part of the story time was using a giant, novelty pair of underwear. We read a book called One Big Pair of Underwear by Laura Gehl and had the kids step into the underwear together. We talked about colors, sharing, taking turns, and counting.

How did you become the “underwear librarian”?

I presented at the Kansas Librarian Association conference in Wichita and briefly mentioned the story time to the audience. Librarians were thrilled to hear this idea. Later when I went to the Scholastic books table, the representative said they had sold out of Laura Gehl’s book. People were calling me the underwear librarian! It was great. Sometimes I worry that my ideas are too silly, but I think story time should be fun and conceal the fact that we’re teaching early literacy skills.

What would you recommend to parents who are trying to engage their children in reading? How would reading about underwear be helpful?

Reading a picture book takes five to ten minutes. You can use something as silly as underwear to show your children how fun reading can be. Reading interactive books like the ones about underwear can start a conversation with your child. Ask about the colors of the underwear they have. Use the books to talk about potty training.  It’s okay if they don’t sit still. Just keep at it. You’ll be building skills and creating lasting memories.

Preschool Story Time is on Tuesday and Wednesday mornings at 10 AM.

I was really excited to read The Princess Diarist by Carrie Fisher. I grew up with Star Wars thanks to my dad and am really excited for the upcoming movies! I have never read any of Carrie Fisher’s other books but I think I will now. She is witty and smart and likes to ramble which is great for a laugh. Reading about her time on the set of Star Wars was fascinating. Seeing the making of such an iconic movie through the eyes of one its stars is wonderful. I cannot imagine being 19, starring in a movie and becoming an instant star. She describes the 3-month time on set through her poetry and journal entries. It was fun to get some insight into who she is, was and what it’s like to be a celebrity in a world that is once again obsessed with Star Wars. I like that she has insecurities like most people and seems down to earth. I am looking forward to seeing where she and her alter ego, Princess Leia, go in episodes VIII and IX. Thanks for the entertaining read Carrie!

Reserve a copy of The Princess Diarist today!

The Gathering Space at Derby Public Library has a new exhibition for art lovers to enjoy, presented by the artists of the Kansas Art Guild. Installed this past week, “Kansas Kaleidoscope” will be available to view through Jan. 9, 2017.

Seventeen Guild artists have brought 57 pieces of artwork to share with visitors to the Gathering Space Gallery. Including mediums such as watercolor, oil, and acrylic painting, and pen and ink and pastel drawings, these works engage the eye and capture the imagination. Each artist brings his or her own energy and talent to the work, and visitors can spend a few minutes or an hour, enjoying the variety and detail presented.

The Derby Arts Council will be hosting an artists’ reception 5:30-7 p.m. on Thursday, Dec. 8, in the Community Room. Light refreshments will be served and the public is cordially invited to attend.

More information about the Kansas Art Guild is available on its website at www.kansasartguild.com. Questions regarding purchase of artwork can be directed to Tami English, Derby Public Library, 788-0760.

Local photographers Bill Fales and Barney Tull have put together a series of their photographs that promise to bring smiles and warm hearts. The exhibition, “A View of the Seasons,” is a treat that will be up through the holiday season.

The exhibition includes 13 photographs that will be on display through the first week of January 2017. While both men have exhibited their work at the library on other occasions, their work can also be seen in locations throughout Derby, including the Venue at Madison Avenue Central Park, City Hall, and the Derby Recreation Commission.

More works by Fales, a Derby police officer, can be found on his website, www.coastalplainsimages.com. Tull, who retired from the Army and from Boeing, offers photography classes through the Derby Recreation Center.

Both men can often be spotted at public events in Derby, capturing the highlights and energy of whatever celebration they are attending.

“Dark Matter” by Blake Crouch was the December selection for our Hauntingly Good Reads book club. We had a great discussion about the book. Here’s my review of it (originally posted on my Goodreads page):

This book might make you re-think your reality. While it’s definitely science fiction, the science doesn’t overwhelm the fiction and the story moves along at a great pace. The characters are well-developed and the settings are a vital part of the story. I had a hard time putting this book down once I started it. I genuinely wanted to know what was going to happen to the characters, and I like having a protagonist that I’m invested in.

There are plenty of unexpected plot twists, but none that feel artificial or forced. I love a novel that offers up plenty of suspense and this one does.

If you’ve ever wondered what might have happened in your life had you made a different choice at any juncture in your life, this book is for you. I highly recommend it.

Welcome to the official blog of the Derby Public Library in Derby, Kansas. We’re excited to begin sharing great information about the library, books, reading, and more with you through this blog. We hope you’ll engage with us by leaving comments and sharing your thoughts on our posts.

Visit us here often for reviews of books, newly released or out for a while. Find out what’s happening with library programs. Read about the books that our book clubs have selected each month.

Thanks for joining us and we look forward to hearing from you! 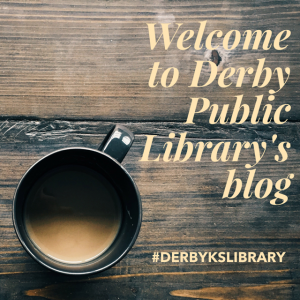