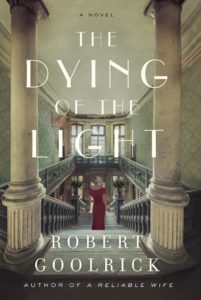 Diana Cooke was “born with the century” and came of age just after World War I. The daughter of Virginia gentry, she knew early that her parents had only one asset, besides her famous beauty: their stately house, Saratoga, the largest in the commonwealth, which has hosted the crème of society and Hollywood royalty. Though they are land-rich, the Cookes do not have the means to sustain the estate. Without a wealthy husband, Diana will lose the mansion that has been the heart and soul of her family for five generations.

The mysterious Captain Copperton is an outsider with no bloodline but plenty of cash. Seeing the ravishing nineteen-year-old Diana for the first time, he’s determined to have her. Diana knows that marrying him would make the Cookes solvent and ensure that Saratoga will always be theirs. Yet Copperton is cruel as well as vulgar; while she admires his money, she cannot abide him. Carrying the weight of Saratoga and generations of Cookes on her shoulders, she ultimately succumbs to duty, sacrificing everything, including love.

Luckily for Diana, fate intervenes. Her union with Copperton is brief and gives her a son she adores. But when her handsome, charming Ashton, now grown, returns to Saratoga with his college roommate, the real scandal and tragedy begins.

Let me start by saying I’ve read and loved all of Goolrick’s books. He has a way of writing human nature and tragedy like no one else. While reading I become consumed and often find myself flipping to the authors picture in the back of the book and wondering how such a kind faced man came up with such heartbreaking stories.

As you can image a book set in Virginia must have some amazing food. Every scene that included a meal had be drooling and running for my kitchen to try to find something, anything that would sate my appetite. There were traditional southern favorites like Paper Bag Fried Chicken  and Ham Biscuits but there were also unknown (at least to me) mentions of Sally Lunn  , a bread that’s similar to brioche and Sugar Toads, a type of puffer fish that is apparently crazy tasty.

If you make any of these recipes or especially if you find Sugar Toads, drop me a note and let me know how delicious it all was!

I'm the Adult Programming Librarian here at the Derby Public Library. I love reading books from all genres and I'm pretty obsessed by everything "pop culture". View all posts by Dawn Best