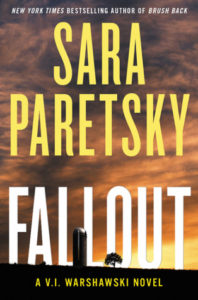 First line: “The police say it was drug-related, ma’am. They think August was stealing to deal.”

Summary: Private detective V.I. Warshawski is on the case again, but this time the case takes her to Lawrence, Kansas. When African-American former actress Emerald Ferring and a young African-American filmmaker, August Veriden, disappear after going to Kansas to film Emerald’s life story, Vic is on the case at the request of Bernie. The deeper Vic digs into Emerald and August’s disappearance, the more mysteries she uncovers, and the greater the danger she realizes they, and she, face.

Highlights: This is a tightly written suspense novel, with new information popping up regularly, and when I was in the middle of the book, I wondered how it could all come together. It does, and it does well. There are a cast of characters and even the minor characters are fairly well-developed. I was never quite sure who I could trust, and it seemed like Vic felt the same way throughout the story.

Lowlights (or what could have been better): This book might just require too much of a suspension of disbelief, unless you kind of have an inclination to buy into conspiracy theories.

FYI: If you are from Kansas and familiar with the Lawrence area, you’ll have to recognize right off that this is not the Lawrence you know. Paretsky took liberties in creating landmarks that don’t exist in the area. Roll with it.

Cori Dodds
I am the event coordinator for the library and City of Derby. I love reading and books and words and writing.

I am the event coordinator for the library and City of Derby. I love reading and books and words and writing. View all posts by Cori Dodds