Ah, the holiday season is upon us. And that means the gift-giving season is upon us as well! If you are having a hard time finding the perfect gift for that hard-to-shop-for person on your list, maybe a book is the answer. We’ve got several great new releases listed below, and most of them will be out  before Christmas—with the exception of the last two titles, which will be out Dec. 26, perfect for late gift-giving!

Do you have a favorite book that you love to give as a gift? If so, share it with us by leaving a comment.

Dec. 5: Year One (Chronicles of the One #1) by Nora Roberts
On New Year’s Eve, a sickness suddenly spreads across the land. Within weeks technology begins to fail, governments have collapsed and half the world’s population is dead.  Survivors have to figure out how to work in this new world, a world where magic is beginning to rise up as science and technology have been destroyed. Some of the magic is good, and some is evil. In this new landscape, one is never sure if someone they meet is a savage or a savior. 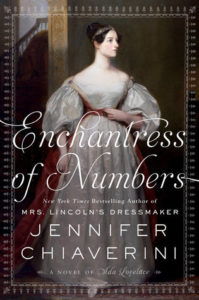 Dec. 5: Enchantress of Numbers
by Jennifer Chiaverini
Ada is the only legitimate child of poet Lord Byron, and as such, destined for fame even before she was born. Her mother is estranged from Ada’s father in an attempt to save Ada from “her perilous Byron heritage” by immersing her in study of mathematics and the sciences. When Ada is introduced into society, she develops a relationship with inventor Charles Babbage and over time, comes to terms with her own imagination.

Dec. 5: The Girl in the Tower (The Bear and the Nightingale #2)
by Katherine Arden
Vasya returns as a young woman, and is compelled to choose between a forced marriage to a prince or life in a convent—both of which will leave her cut off from the world she longs to explore. Instead, she chooses to leave home disguised as a boy and sets off on an adventure. A battle brings her to the attention of the Grand Prince of Moscow, from whom she must hide her secrets, even after she realizes that she is the only one who will be able to stop the mysterious forces that could destroy his kingdom.

Dec. 12: You’re Gonna Love Me by Robin Lee Heather
Samantha, an accountant, lives her life as safely as she knows she should. Then Nick comes into her life and she can’t help falling for him. However, when he plans a dangerous kayaking trip, Samantha ends their young relationship in anger. Fast forward two years, and Samantha’s grandmother has had an accident, so Samantha travels to Thunder Falls, Idaho, to be with her. Who does she find there, but Nick. With the encouragement of their family and friends, and a whole church congregation, can they try again? 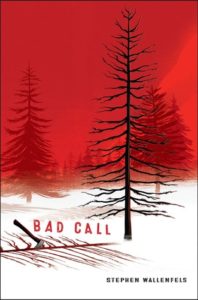 Dec. 19: Bad Call by Stephen Wallenfells (young adult)
Four boys from a prep school make plans to go on a camping trip in Yosemite National Park. What could possibly go wrong? Before the group even gets out on the trip, one of them backs out. Then, a girl replaces him. Then, there’s a fire at their intended campsite. So they decide to take a treacherous trail to the top of Yosemite Valley and the bad decisions really begin to pile up. After more mishaps and issues, one of them doesn’t make it back to their tent and the rest of the group tries to figure out what happened while desperate to survive themselves.

Dec. 26: The Road to Bittersweet by Donna Everhart
Wallis Ann Stamper is 14, and lives in the Appalachians, which is not easy but she finds it satisfying. Her older sister is a mute and musical savant and is constantly watched over. Wallis, however, is rugged and and practical. When a flood forces her family from their home in the middle of the night, Wallis is exposed to a whole world beyond the banks of the creek that carries the family name. As the family makes its way to the hill country of South Carolina, the experiences Wallis has will take her across some rough terrain, not all of which is physical. 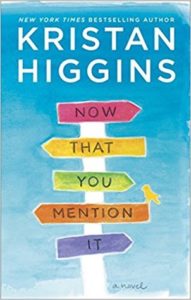 Dec. 26: Now That You Mention It by Kristan Higgins
The scholarship Nora Tufts received was a step toward becoming a medical specialist. Then she was hit by a car. Then she overheard her boyfriend hitting on another doctor and that was two huge steps backward. So Nora goes back to the tiny Maine community she was so eager to leave 15 years before. And they don’t necessarily want her back.