The Kingdom of Wrenly Series by Jordan Quinn 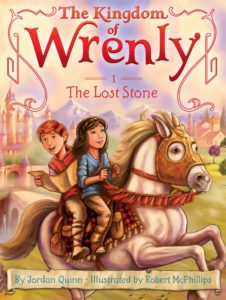 If you’ve ever stepped onto the grounds of a Renaissance Faire, you know the thrill of seeing armored knights jousting on war horses, kings and queens reveling in court gossip, and sacred fairies and elves shouting at you from treetops. All of this and more can be found in the amazing young reader series, The Kingdom of Wrenly by Jordan Quinn!

I am a sucker for a good middle-grade series, especially one that captivates the imagination while still being both accessible to new readers and not watered down in plot or character development for the sake of younger audiences. The Kingdom of Wrenly series is as rich as the fantasy worlds of Lord of the Rings or Game of Thrones, but with a tone that is both exciting and comforting.

Prince Lucas is the son of the King and Queen of the realm of Wrenly, a land of wizards and mermaids, fairies and gnomes. Along with his best friend Clara and his pet dragon, Riskin, Lucas has many adventures in Wrenly from battling a giant sea monster to stopping a witch’s curse.

The series has 12 books so far (we have 11 and the 12th one is on its way) and while the books are best read in order, readers can jump around without missing too much. Each book is like an “episode” in the world Wrenly and follows Lucas and Clara on an adventure that shows a new part of the fantastical realm. The books are on average 100 pages in leng 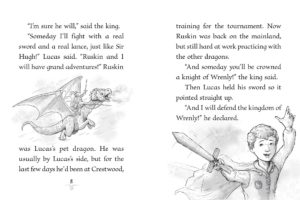 th and each page has an amazing illustration or graphic to break up the text. The books are in the same writing style and format as the Magic Tree House Series by Mary Pope Osbourne and excellent for readers who are ready for both chapter books and a beginner level fantasy series. If your reader is looking for a series that is both accessible and entertaining, I would highly recommend the Kingdom of Wrenly series! 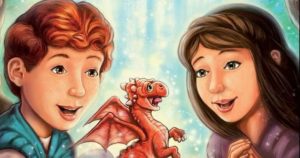 P.S. If you would like additional activities about the Kingdom of Wrenly, check out the publisher’s website for the series, www.kingdomofwrenly.com for coloring sheets, a word search, quizzes, and more!