Salt to the Sea by Ruta Sepetys

This review was written by our new Youth Services Assistant, Kayley Ramsey! Kayley has been living in the Wichita/Derby area for about eight years and teaches 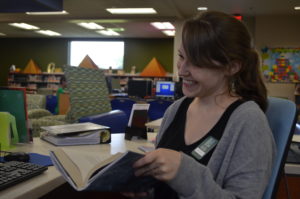 photography classes at Wichita City Arts. She’s a lover of historical fiction, fantasy, and anything with a great adventure. Feel free to come back to the Youth Services desk to meet her and get some great book recommendations!

Salt to the Sea Book Review by Kayley Ramsey 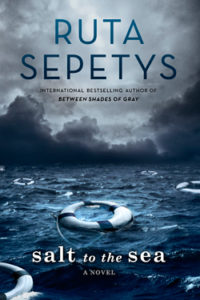 First Line: Guilt is a hunter.

Summary: On January 30th, 1945, three Russian torpedoes sunk the Wilhelm Gustolff, a German ship carrying 10,582 passengers, the majority being refugees hailing from all parts of Europe escaping war torn territory. Over 9,000 of those passengers died that night in the Baltic Sea, a tragic 5,000 at least of those were children. It is by far, the most deadly maritime disaster to have ever occurred dwarfing the infamous Titanic and yet it is often overlooked by history books and World War II accounts. Salt to the Sea tells the fictional account of a traveling group of refugees, each with their own secrets and goals braving war-torn Europe to make their way to the fateful Wilhelm Gustolff and toward freedom.

Highlights: Salt to the Sea is beautifully written from multiple 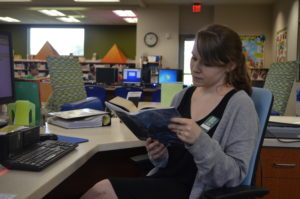 perspectives, illuminating a charming, brave, and lovable band of characters that you really don’t want to drown in the Baltic Sea. Sepetys makes a point of shedding light on the suffering on all sides of a war. She seeks to tell the history of people groups that suffered during World War II, yet aren’t often talked about or remembered. In this, Salt to the Sea is an eye opener, reminding us all of the totality and the span of war and hatred. The book is as educational as it is moving.

Lowlights: This book is not for the faint of heart. It speaks realistically of the horrors people faced in wartime, both at the hands of human hatred and by the forces of nature. Several times, I had to slam my book shut and rant to my husband about the horrible injustice of it all but then of course, I quickly picked it back up because Salt to the Sea is a page turner and against your better judgment, you are going to get attached and want everyone to live happily ever after. 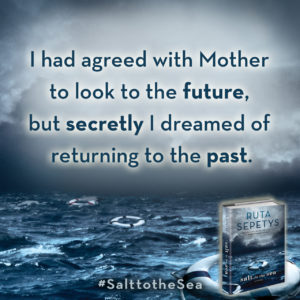