Where has February gone? It can’t possibly be the last day of February already. But it is a Tuesday, and that means there are new book releases today. Here are some books released in the second half of February that are getting quite a bit of buzz in the reading community.

Let’s start with titles that were released last Tuesday, Feb. 21:

“The Orphan’s Tale” by Pam Jenoff — World War II, a 16-year-old girl forced to give her baby up after getting pregnant by a Nazi soldier, a circus, and secrets. This novel explores how two women, Noa and Astrid, form a powerful bond, but is it strong enough to protect them or will it destroy everything? With a rating of 4.2 stars on Goodreads, this book will especially appeal to historical fiction readers.

“Dreamland Burning” by Jennifer Latham — Do I need to add more than this tagline from the book’s description on Goodreads? “Some bodies won’t stay buried. Some stories need to be told.” The investigation of a century-old murder begins when 17-year-old Rowan unearths a skeleton on her family’s property. Goodreads readers have rated this book for young adults 4.4 stars.

“A Piece of the World” by Christina Baker Kline — In this novel from the author of the No. 1 novel “Orphan Train,” Kline skillfully weaves fact and fiction as she illuminates a little-known part of America’s history. Christina Olson was host and inspiration for American artist Andrew Wyeth and this novel brings to life the relationship of the two. It is rated 4.2 stars on Goodreads.

Here are the titles we’ve been waiting for that are out today (Feb. 28):

“Daughter of the Pirate King” by Tricia Levenseller — a 17-year-old pirate captain, searching for an ancient hidden map, allows herself to be captured by her enemies so she can search their ship. This book is rated 4.3 stars on Goodreads.

“Waking Lions” by Ayelet Gundar-Goshen —A translation from the original Hebrew, “Waking Lions” is the story of how a decision made at the scene of a tragic event can change a whole life. This gripping novel follows Dr. Eitan Green after he hits a man while speeding along a moonlit road. It has a 3.8 rating on Goodreads.

All of the above titles are available on our catalog, so come in and check one out today.

We are so proud to participate in the screening of the Oscar-nominated short films each year. Last night (Friday, Feb. 24), the live-action and animated short film nominees were shown. For most people, these screenings may be the only opportunity they have to watch the films. They are not generally available in wide release.

Each year, we ask the people who come to watch the short-film nominees to vote for their favorite film in each category. (If you missed the announcement of our viewers’ pick for the short documentaries, you can read it here.) Here are their choices for the live-action and animated categories:

This short film from Spain is about a young, female security guard (Luna) who is bored by her daily routine in the parking lot. But when a call about a customer complaint comes in, she learns how the nighttime guard (Diego) avoids boredom. The two develop a relationship as they communicate through the parking garage’s CCTV system.

When Piper, a young hatchling, leaves her nest for the first time, she is afraid of the surf where she is supposed to find her food. An unexpected ally helps her overcome her fears to find her confidence.

Last night (Thursday, Feb. 23) we aired the documentaries that are nominated for Academy Awards in the short films category. We had a great showing, and the stories were powerful. We ask those who attend to vote for the film they think should win the Oscar, and the documentary they chose was “The White Helmets.” This 41-minute movie tells the

story of the rescue crews, known as the White Helmets, who work in war-torn Syria.

These brave, unarmed and neutral civilians dig through the rubble after bombings, sometime dozens or more a day, to find survivors and recover the dead. They place themselves at risk, willingly, and while constantly in danger and even targeted themselves, they have saved more than 60,000 people.

This film is available to watch on Netflix.

Bookmarks come in all shapes and sizes. Sometimes it the closest thing at hand that gets stuffed into a book. As librarians we see all sorts of things returned in our books…

But one of the newest and strangest things we have found is tire marks. Luckily the book survived the ordeal but it left its mark. 😉 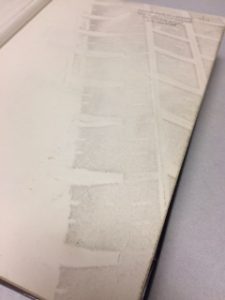 What is your favorite go to bookmark? Post a photo in the comments.

It is always a great feeling to have an extra day off work. A day to enjoy with family, read a book or even sleep in. Our staff was able to observe President’s Day in just this fashion. We all basked in the 60 degree weather of February? That is correct. February. We definitely know we are still in Kansas with its crazy weather patterns.

But Tuesday it was back to work. After a day off we always expect to have a full book drop and lots of holds. Our staff was ready and we worked through 3 carts full of books and media followed by a list of 86 holds! Challenge accepted. We searched and found. It is great to see how many people use our hold service and how valuable it is our patrons.

At 4:00 p.m. we had overflowing carts with items to be shelved. We are very thankful for our wonderful pages! 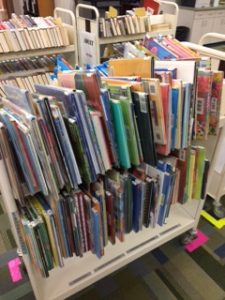 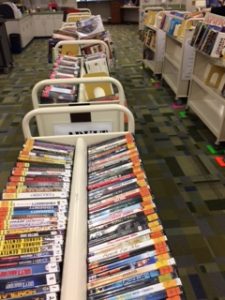 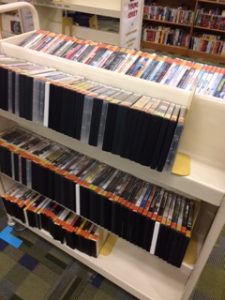 I remember as a child being read to before bedtime. My father worked early (driving 45 minutes to work at 4 a.m.) but he still made time to read to my sister and I before we went to sleep. He read us books that he loved from his childhood and hoped that we would enjoy as well. The two books that I remember the most are The Hobbit and Brer Rabbit and the Tar Baby.

When this book showed up in a box of donations I was suddenly taken back to my childhood. The story follows Brer Rabbit being captured by Brer Fox and Brer Bear using a tar baby as a decoy. But the smart Brer Rabbit uses his wit to get away from his captors by convincing them to throw him into the briar patch.

I remember laughing at this funny story and how smart the rabbit was. When our family took a trip to Disney World several years later I was excited to see that there was a ride centered around the story of Brer Rabbit and his fall into the briar patch. This has continued to be one of my favorite rides at the Disney parks because of the nostalgia. Thanks to whomever donated this book to us and to my father for making time to read to my sister and I as children and instilling in me the love of reading!

Do you have any books that you remember loving as a child? Did one of your parents read to you before bed? Let us know!

The hardest working ladies in the biz, the ILL (Interlibrary Loan) department, have started tracking where our books travel to. Two of the most interesting places so far have been Truth or Consequences, New Mexico, and Hamilton, New York (voted one of the top 10 friendliest places to live). 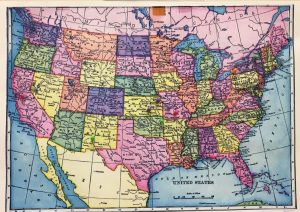 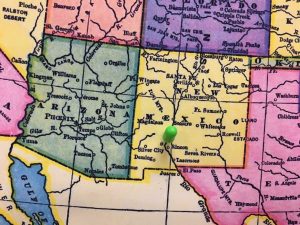 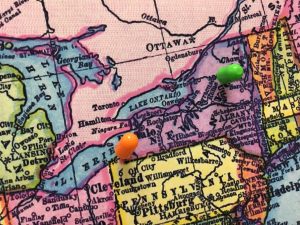 We love Tuesdays at the library. Tuesday is the day new books are released! So what titles are we looking forward to that will be released Feb. 7 and 14? Here are a few of them:

Feb. 7: King’s Cage (Red Queen #3) by Victoria Aveyard — This third installment in the Red Queen series finds Mare Barrow held captive and without her lightning. Cal is exiled while his brother Maven, who holds the throne, attempts to maintain control over his country and his prisoner, Mare. 4.3 stars on Goodreads.

Feb. 7: Swimming Lessons by Claire Fuller — Ingrid Coleman disappears from a Dover beach, leaving behind her husband and two daughters, after writing the last of the letters to her husband that expose the truth of their marriage. However, instead of giving her husband the letters, she has hidden them among the thousands of books he has collected. This book gets 3.9 stars on Goodreads.

Feb. 14: Lincoln in the Bardo by George Saunders — This is the first novel from a National Book Award-winning author. The novel takes place over one night, explores grief, death and more as Abraham Lincoln buries his 11-year-old son, Willie, as the country is divided by the Civil War. Goodreads readers rate this book 4.4 stars.

Feb. 14: The Chilbury Ladies’ Choir by Jennifer Ryan — Set in England as the country enters the dark, early days of World War II, this ensemble novel tells the story of the women of a small village named Chilbury. As the pastor seeks to disband the village church choir, a music professor encourages the women to keep singing. Told through letters and journals, the story shows the indomitable spirit of women on the home front. Rated 4.2 stars on Goodreads.

We love to accept donations of fiction and nonfiction books, DVDs and books on CD. But every so often we find a real treasure in the bottom of boxes…and we thank you! Our staff really enjoys finding little surprises in donations (but not the creepy crawly type). Recently, buried under a stack of classics, we found one such treasure.

I am sure this will get a lot of use for either work or fun! Thank you to the patron who brightened our winter days. 🙂